I’m having such difficulty uploading these blogs because the Wi fi in the Grand Canyon is horrible. When they do eventually upload there’ll be like three blogs put up at one time.

Any who!
On Saturday morning we left Las Vegas at 8am. There was 1 person running for the bus but he made it just in time.
On Contiki they have really strict rules with being on time.
If you’re late to the bus, our driver Ricky will leave without you as it holds everyone else up.
And it’s pretty much up to you to find your way to our next destination.
I have run for the bus once but that’ll be talked about in my next blog…

On our way to the Grand Canyon we stopped off at Walmart haha.
I’ve never been to Walmart before as we don’t have them in New Zealand but you hear so much about this amazing store as it’s in movies and TV shows all the time. It literally has everything you could ever want.
When we arrived, at the front of the store this guy was sitting in a chair giving away free kittens!! I had to pick them up and give them a pet as they were so cuteee. Contiki Cat anyone?

Walmart also had a McDonald’s inside, it was half a grocery store, clothing store, pharmacy and auto parts store all in one. Crazy!
As I was feeling a bit sick/hungover I didn’t get really any snacks from Walmart for the Grand Canyon.
I did get a bag of grapes and had some fries and a sundae from McDonald’s though. Everyone found it so weird how I dipped my fries in my ice cream. Does anyone else do that? I think it tastes great but all the Australians thought it was disgusting!
Good they didn’t see me put my soft serve inside a burger then….I’m weird I know, but it really doesn’t taste as bad as it sounds. Try it some time. 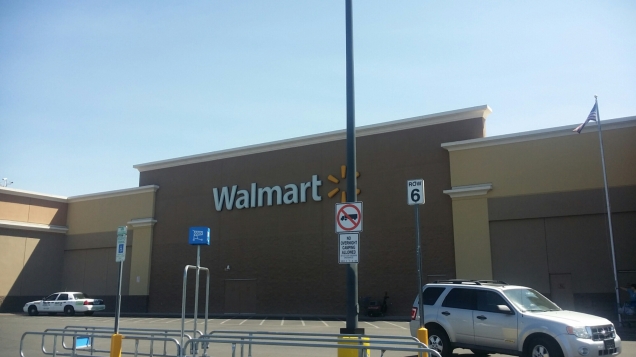 After Walmart, We drove through Route 66 and stopped off at a Gift Shop there. I bought another magnet to add to my Magnet Collection 🙂 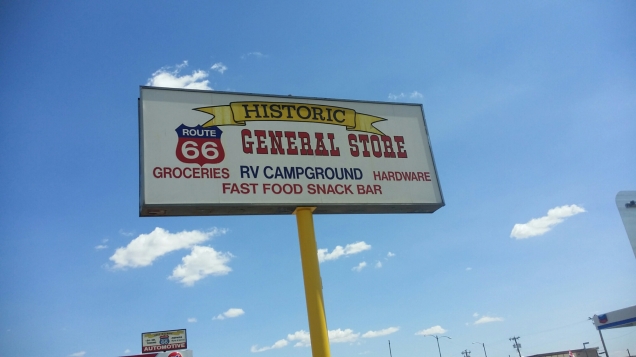 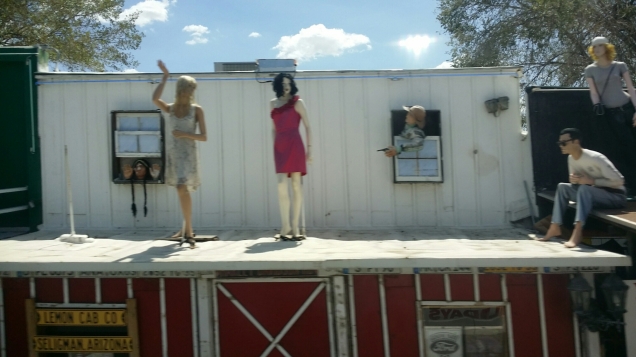 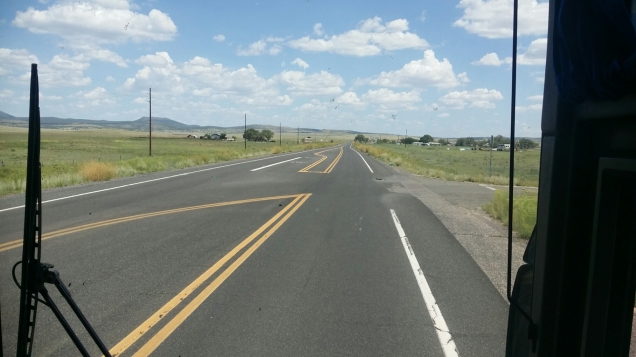 We got to the Grand Canyon about 4pm. It’s funny because the bus rides honestly don’t seem that long. Our tour manager talks a bit about stuff so that keeps us pretty occupied, plus we all played a Speed Dating type game to get to know each other.
I also watched a bit if Orange Is The New Black on my tablet and Blake put The Hangover 2 on the Coach TV for us which was very fitting as we just came from Vegas. 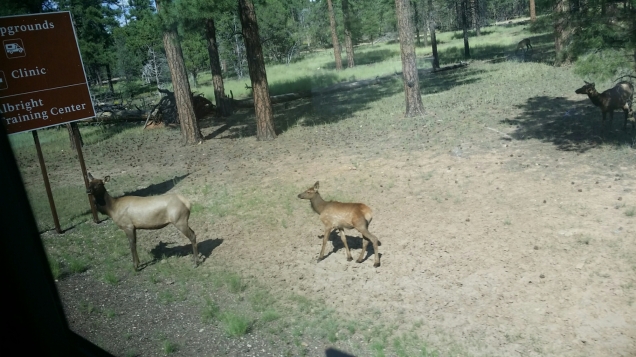 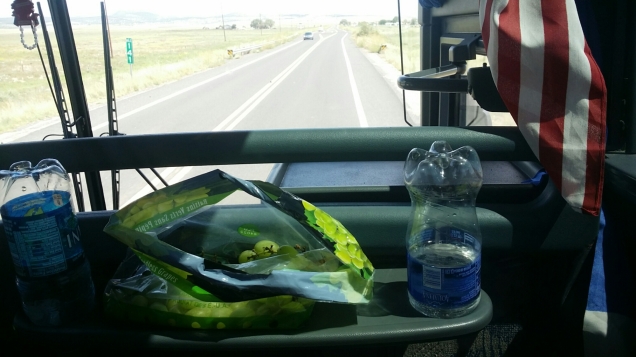 If you haven’t been to the Grand Canyon, there’s really only one word to describe it. Massive!
It’s really cool to look at as you can see all the history on the rocks and formations, and to think it’s been around for so many years! 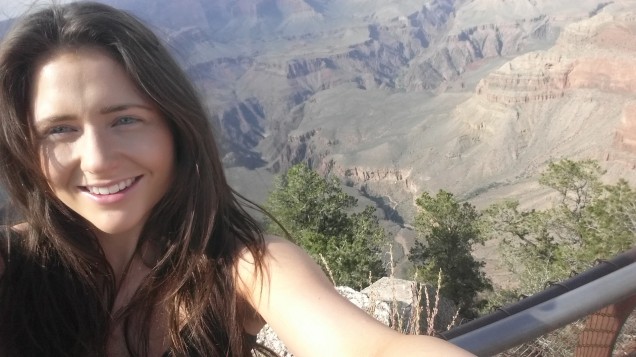 Can you tell I hadn’t straightened my hair before this picture? 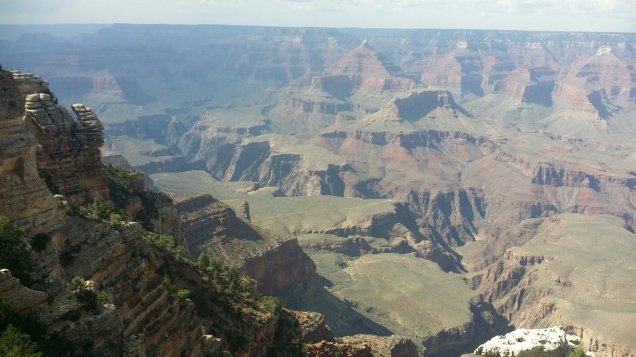 After our quick photo stop, we drove to our lodge where we were all staying and everyone settled into their rooms and either had a nap or went to the restaurant area to get some food.
Around 7pm, everyone had pretty much made their way to the restaurant for food so we all ate and then played some board games afterwards.
There were 3 people’s birthdays so our tour manager bought them each a card and slice of cake which was nice. 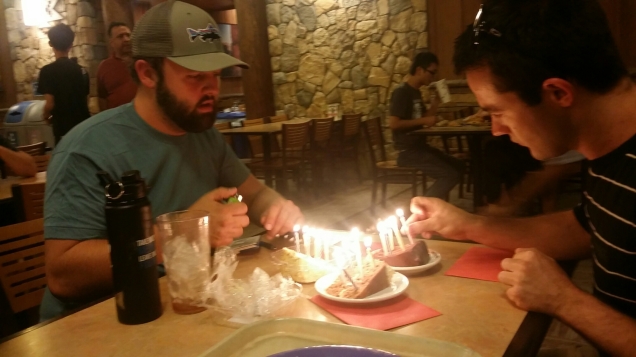 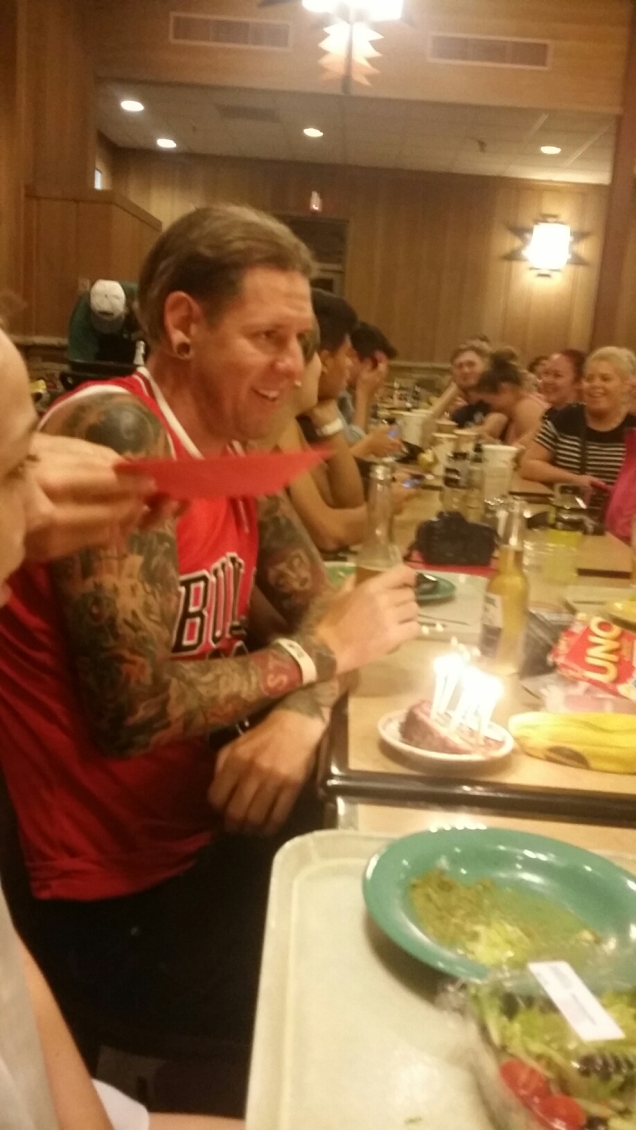 The place we all ate was set up like a food hall. There were lots of table and chairs and a few counters of food you could buy food from. By the end of the night we all had our tables together and were up talking and playing “which would you rather” for awhile. I eventually headed off to bed to watch some Orange Is The new Black before I went to sleep ☺
The rooms looked a bit like cabins (probably because it felt we were in the woods). They were extremely hot but I had a good sleep that night. Maybe too much of a good sleep as you’ll read about in the next post…
X