Waking up the next morning in Durango, I got up to be on the bus by 9.30am to go river rafting!
A few of us from Contiki went rafting and the rest went horse riding. (You got to choose what one you wanted to do)
We were all pretty hungover from last night and the river rafting was really easy and casual so it was just what we needed I think.
I did jump into the river and it was pretty cold! So that woke me up.

It took over an hour but it was nice just to float down the river and yarn about our New Zealand and Aussie accents to our American tour guide.
As we were floating down the river, I saw these little squirmy things in the water underneath the sand. Our tour guide said that they were like little snakes but they were harmless. This got us talking about snakes and I announced that we had no snakes in New Zealand but Australia was known for them.
One of the guys Ben then quickly said “No, I used to live in New Zealand and we have snakes”
Then the other New Zealander, Dave chimed in “Yeah there’s lots of snakes”
Me “Uhh, no there are defiantly NO snakes in New Zealand”
Dave “Oh course there are! I’m sure you’ve seen plenty”
Me “What the fuck, I have never ever seen a snake in New Zealand”
Dave “Yeah, the Trouser Snake”
Me “I have never heard of that type of Snake, You must be thinking of Australia”
Ben “Oh yeah Australia defiantly has them as well but I also know that NZ does”
Me – Getting annoyed by this point “What! No we don’t have ANY Snakes. I know this because my Mum has a massive phobia of snakes and that’s one of the reasons she moved to New Zealand from Australia”
Dave “Well I don’t think she got away from the Trouser Snake”
By this stage the boys were laughing but I still couldn’t figure out how they thought we had Snakes in New Zealand.
Even our Tour Guide joined in “Oh yeah! No we learnt about Snakes in School and New Zealand defiantly has them”
I was actually getting angry because I knew I was right and they were wrong.
It wasn’t until they made a little hand motion towards their nether-regions about 10 minutes into this conversation and said “You know, the Trouseeer snake” that I finally clicked what they meant.
*Sigh* they got me there.

Once we were all finished with rafting and horse riding, I went and got some food from the supermarket and we all met and boarded the bus to Albuquerque.

Albuquerque is the biggest city in New Mexico and it’s no wonder as they have around 270 days of sunny blue skies every year. Albuquerque is also known as The “Hot Air Ballooning Capital of the World” as it’s home to the International Balloon Fiesta, the world’s largest gathering of balloons from around the world. This event takes place during the first week of October every year so we were about a month too early to see this!
Breaking Bad was also produced in Albuquerque for all you Breaking Bad fans 🙂

We arrived here around 5pm this afternoon.
To be honest apart from the rafting, it’s been a very basic day. We’ve had a few stops on the way to get food etc… but it’s pretty much been a bus day which involves sleeping, listening to music or watching a movie on the bus. 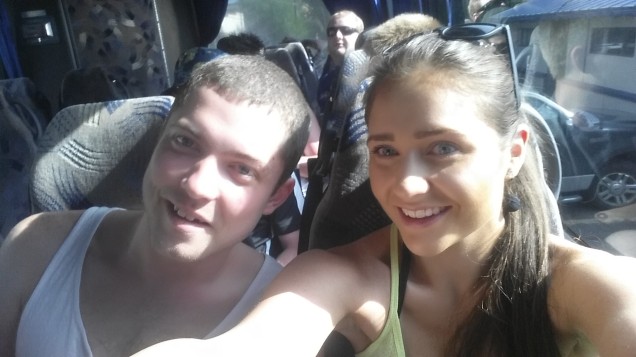 I’m now currently in bed at a hotel in Albuquerque. We all had a buffet dinner (lasagna, fish, chicken and salads to choose from) and then we did some karaoke at the Hotel we’re staying at. (Well I just watched the karaoke as I have a terrible singing voice)

I went to bed pretty early as I wanted to finish doing all my washing, write up a blog and call my best-friend.
Not all the places you stay at have washing machines and driers so when you have a hotel stop that provides laundry it’s first in, first served!