Oh heeey Amsterdam!
The country where you can smoke all the weed you like, choose to legally end your own life and get married to the same sex.
I love this country!
They are so laid back and practical about life that I can understand why everyone is so happy and chilled out there. 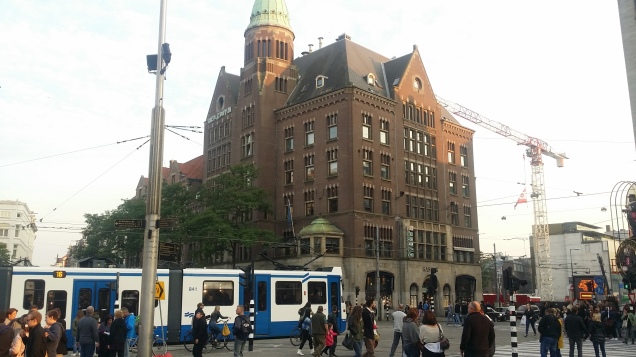 I was so impressed to see also, how environmentally friendly Amsterdam is. Pretty much everyone owns a bike and bikes everywhere. It’s so flat that I can’t see why you wouldn’t have one.
If you do have a car however, people are usually driving small ones or new ones that don’t use so much gas.
Amsterdam has a goal to be one of the most eco-friendly places in Europe and they’re doing pretty well. They have 300 power hookups around the city to recharge electric cars, solar panels that are apparently being installed on Amsterdam’s historic 17th century townhouses, and infrastructure upgrades that will allow households to sell energy they generate from small-scale wind turbines or solar panels back to the city’s electricity grid for a profit. Banks also give money to people so they can buy energy saving light bulbs for their houses.

On the way to our hostel on Saturday, we stopped off to have a cheese and clog demonstration in the Netherlands. (One of the included extras on the Top Deck tour)

Basically we went to this farm where a guy makes his own cheese and sells it. There was also a gift store next door so I bought my Mum a cheese grater.
This tour doesn’t sound very exciting does it? Probably because I wasn’t amazed by anything they did.
Like we learnt some facts about cheese and how the total cheese production in Holland is 30 million pounds per week.
Which is alot of cheese! 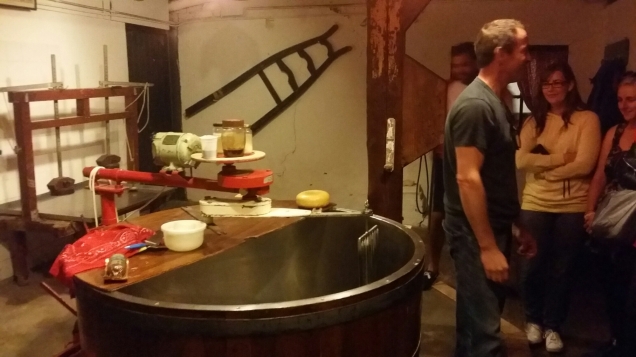 It’s sold everywhere here as well. But we didn’t see anything get made, just told how it was made and tried some slices.
I actually wish i could have bought some cheese but there was no way I was going to take pounds of it to Croatia this weekend. 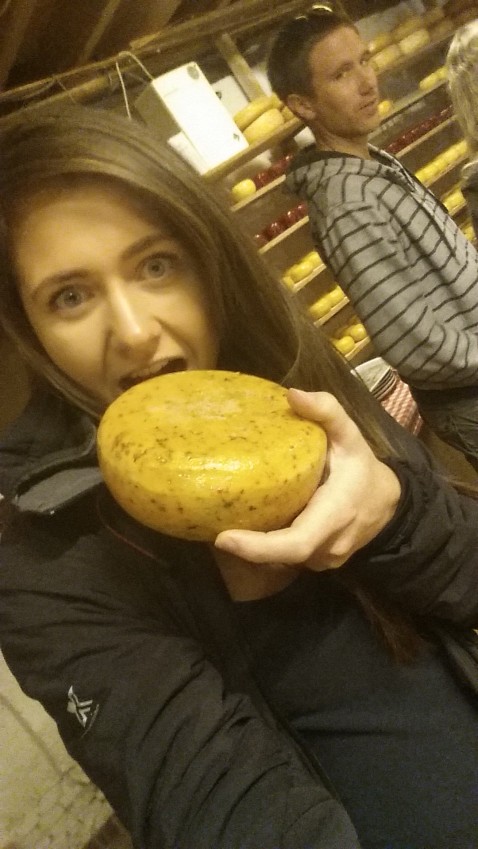 When we arrived at our hostel,  we had about an hour to get ready to go out before our walk around Amsterdam and the Sex show.
1 hour is still not enough time for 6 girls to shower and share 1 mirror! I don’t think our male leader understands. 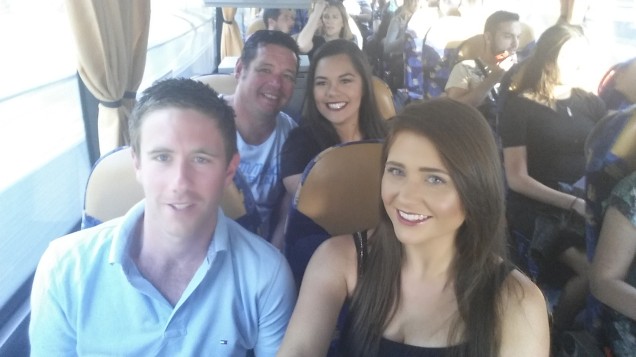 But we made it in the end, even if Kara and I were the last ones on the bus.
As I was down to my last 2 pairs of shoes (nikes and some heeled boots) I had a little trouble walking on all the cobblestones around Amsterdam. I don’t know how the red light district girls do it! Maybe they wear ballet flats to work.

We checked out a few building around the city centre and then had a walk through the Red Light district when it was still light.
If you have no idea what that is, it’s basically an area of Amsterdam that the locals call, The Rossebuurt.

It’s unlike any other place where women, of all nationalities, parade their bodies in red-fringed window parlous, most of them ready to offer more than just a look in their little private area.

What you’ll see also is lots of men, young and old, couples holding hands and pointing in shock of it all, giggling groups of women celebrating a hen night, and busloads of Japanese tourists with cameras (except not in the direction of the female entertainers as that’s strictly banned!).
It’s a major Amsterdam tourist attraction and there are several tour agencies and independent tour guides offering guided tours.

We were left to our own devices for an hour to have a walk around and then meet back to go to the Sex show together.
Myself and the girls wondered around to lots of different shops selling everything from cannabis lollipops, sex stores with ‘pre order your size condoms’ and cannabis ice creams.

I’ll be honest here, in Amsterdam they have these things called Coffee shops.
Now they’re not like the cafés back home where you order a muffin and sip on a latte. Instead your muffin is replaced by a hash brownie or space cake and you’re inhaling a joint instead of a latte.

When the Dutch government made a law between ‘hard’ and ‘soft’ drugs back in the 1970s, that’s when all these Coffee shops came about. They’re more in a legal ‘grey area’ because while cannabis isn’t actually legal in Amsterdam, it is tolerated.
Basically the City Council, allows coffee shops to operate with the provision of set, non-transferable licences – shown by the display of an official, green and white sticker in the window.
You can’t enter the coffee shops in Amsterdam if you’re under 18 but you’ll know if you’re in one that has cannabis because the people smoking at the table usually give it away.
Its tricky though because even though they have a menu they’re not allowed to do any advertising, you’ll generally not find any details posted on the door or even inside about products with cannabis in it.
You have to ask the person at the counter for the menu, and they’ll give you what you need. A general rule of thumb is: the more expensive, the stronger the weed. For inexperienced smokers a gram of weed will get you high about 6 times and you should be able to make at least 3 joints from a single gram. Ask for advice if you are not sure, these people are here to make sure everything is safe. 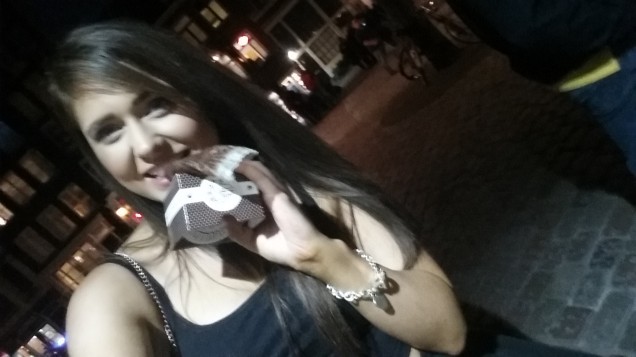 As I was still sick from the flu/terrible cough on Top Deck I didn’t smoke anything in Amsterdam. Good girl I know! 😇 Also I’m not really a smoking of anything to be honest.
I can’t say the same for what I ate though…

Once we’d explored, we all grouped together and went to an Amsterdam sex show.
Prostitution, brothels, sex shows etc… are all legal in Amsterdam. The government is basically like, if you’re going to do it we’d rather you be safe. You can’t do it if you’re younger than 21. If you’re a prostitute you’re required to register and then they receive a registration pass with a photograph and a registration number, but no name or other personal data.
The companies who run stuff like this also have to have a license and you all have to pay your taxes.
Fair enough I guess. 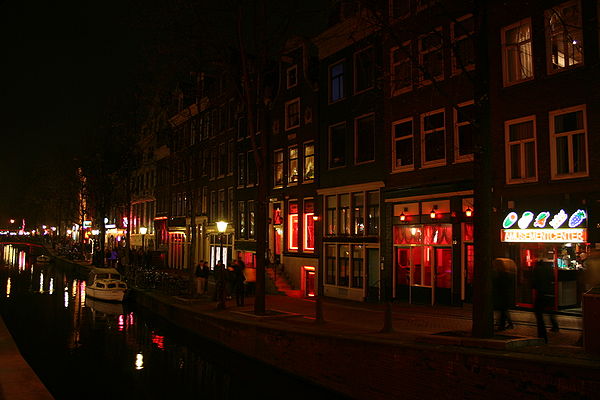 Is it bad that I can’t remember what happened after that….
I think we all went to this club which was next to a hostel so it was just filled with people on Top deck/Contiki Tours. I think I got a bit drunk/stoned so I was on a pretty chill mood. Nothing was really happening at the club apart from the rugby game and a bit of music so I left around 1am with a few others from Top deck.
Aaahh, I nearly forgot. I had the most amazing waffle on the way home. 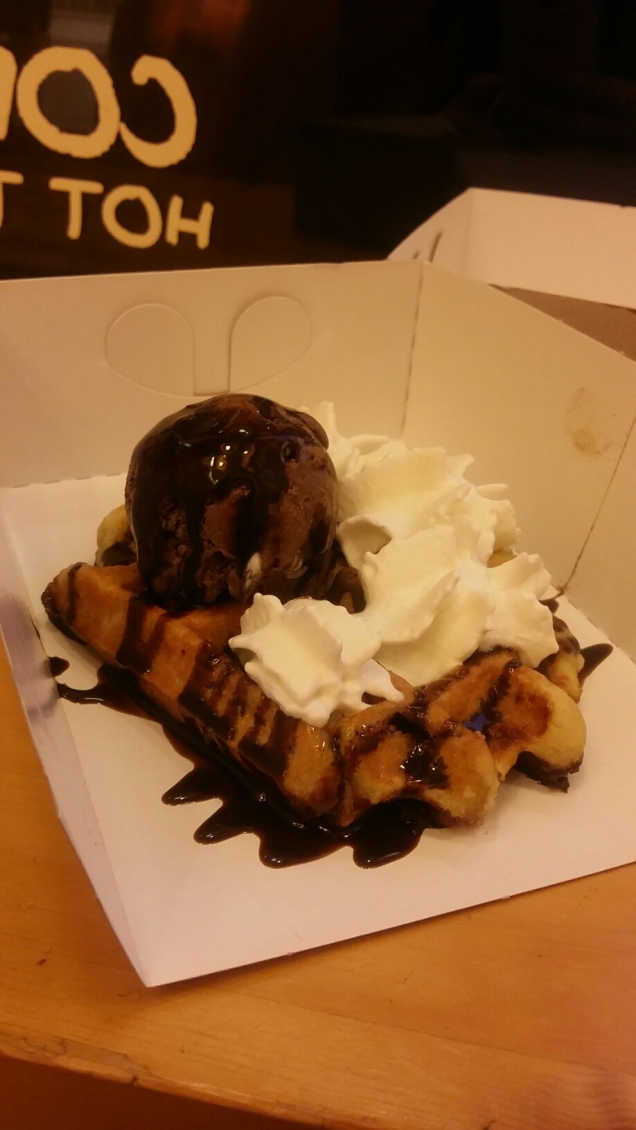 Let me just say, Amsterdam is a stoners paradise. FOOD IS EVERYWHERE.
Everything you can bloody think of is lit up in store windows.
Waffles, Crepes with Strawberries and Cream and Bacon and Cheese, Cupcakes and Croissants, Sausages and Frites (fries) with 20 different sauces. Anything you feel like is probably open at 2am. No wonder I’ve gotta tuck my stomach into my jeans now. I’m serious as well, I’ve lost all my tone-ness I ever had before I left.
Fml.
I couldn’t live in the Netherlands purely for the fact I’d be the size of a house.
Xx 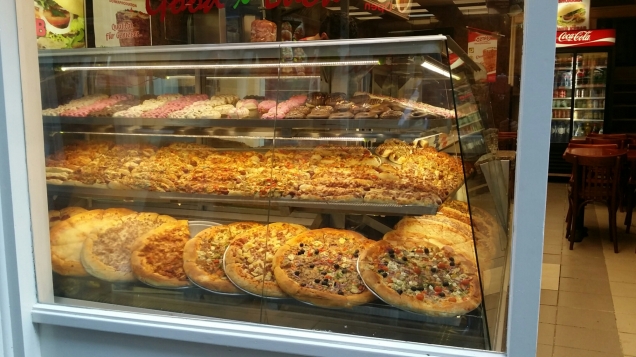