We arrived in Rarotonga last night on a very late flight from Auckland.
We left around 7:45pm and after a 4 and a half hour flight, eventually landed in Rarotonga around 12.30am. We where a bit late as the pilot announced there was a lot of rain so we had to circle above the airport until it passed.

Surprisingly the flight went by quite quick. It wasn’t full so the four of us (my boyfriend Nathan and our friends Kerri & Glen) all spread out on the seats. I had a whole row to myself and so did Nathan – such a treat when you’re cramped up on a Jetstar flight!

I read most of the way and Nathan watched a season of Vikings that Glen had downloaded beforehand (there wasn’t any entertainment on – board)
I’m not normally a Jetstar flyer for long-distances because you don’t get much on the flight, but I found a really good deal to Rarotonga a few months ago that was worth the small leg room and no free food 😦

When we eventually landed, we had to quickly run from the plane to the terminal as it was still raining a little bit. If you’re planning on going to Rarotonga, don’t expect much from the airport. It’s your typical small island airport – very small and basic but you don’t really need much from it anyways.

The resort we where staying at organised a shuttle to take us to the resort, unfortunately I think they forgot to tell the driver as he had no idea but he happily took us anyways. For $20 per person I was expecting more than a leaky, damp van but from I’ve come to realize in Raro is that it’s a very simple island. It’s a country of little money and basic necessities with things being very expensive. However it’s still being such a beautiful place with kind people and a very laid-back atmosphere.

When we got to the resort, we found our room (a nice 2 bedroom apartment) and all had showers to wash the ‘flight feel’ off before promptly heading off to bed. I was soo tired I actually had a pretty good sleep, even if I didn’t have my most favorite pillow with me haha. Unfortunately Kerri & Glen had an awful sleep because the people in the apartment next door to us (these four guys) basically had a party all night long. Kerri thought we where staying over the bar because they where so loud but it turns out they just spent up large on booze with their Virgin Australia flight.

Breakfast ended at 10am so when we woke up at 9:30am we quickly got dressed and headed down to the bar/breakfast area to eat some tropical breakfast before heading back up to our room to get ready for our day.
It started raining in the morning much to my disappointment (as I always think it rains when I take my boyfriend away on holiday) but it cleared up pretty quickly. We where told from the owners of the resort that a bus left every half hour outside the resort to take you into Avarua (the nearest town) where they had the Punangi Nui Market that morning until 12pm. We decided to do that so waited for the bus….and waited…and waited. Until eventually it came chugging up the road with the windows down and the driver singing Hallelujah by Leonard Cohen.
I think we got lucky with the best Bus Driver on the Island. I can’t remember his name but he was quite a laugh – cracking jokes and making up stories along the way, like how he was really out from prison that day and it was just his day job driving a bus.

At the markets, we had a quick browse but it was mainly locals selling fruits and vegetables and some nice sarongs. We didn’t really find anything we where interested in so headed across the road to Polynesian Rental Cars so we could get a couple of Scooters for our stay.
Originally I thought we where all going to hire a car but getting a scooter was the better option as they where cheaper and overall more fun to ride.
While the boys where hiring the scooters, I quickly went across the road to buy an SD card for the GoPro, unfortunately the one I’d put in wasn’t formatted properly so it wouldn’t work. I was going to buy a new one at the Auckland Airport but they where $65!!
Good I waited until Rarotonga because I got a 32GB one for $45 instead. 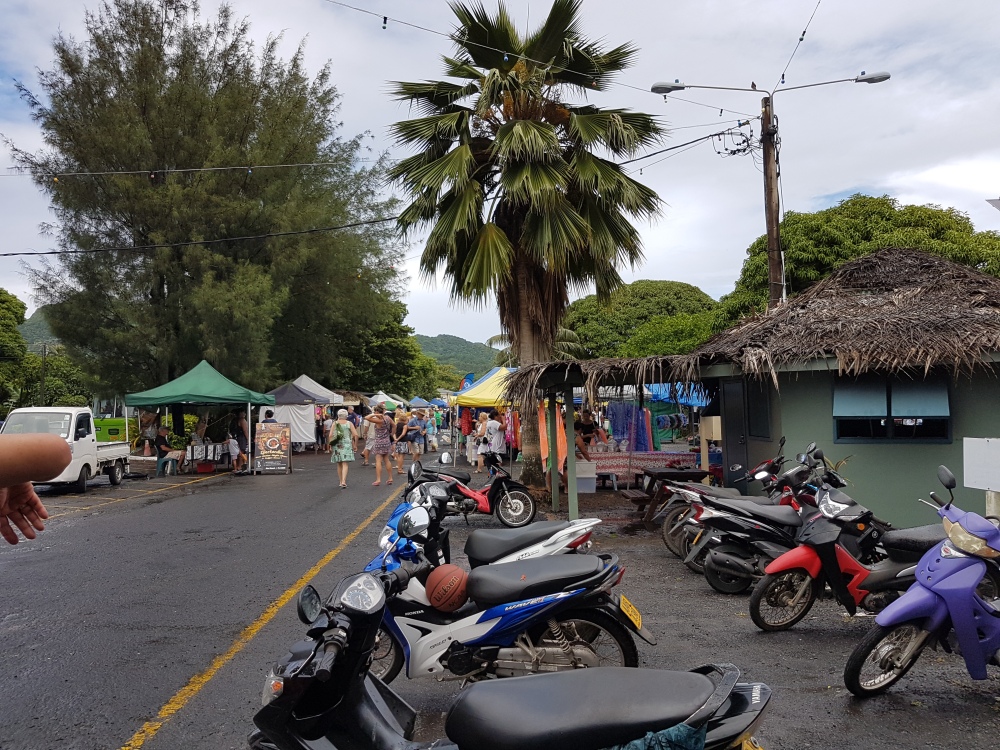 Off we went on our scooters to explore the Island!
First stop was the grocery store to buy Sun cream and bottles of water. Coming from a New Zealand Summer, it was much hotter/humid than it was back home. Weirdly the Supermarket didn’t sell any sunscreen (apart from one bottle that looked like it was made on the side of the street) so we had to go to a clothing store a few shops down that sold them instead. However, they where like $40 a bottle!
They use New Zealand dollars over here and Sun Screen is expensive enough back home, I wish I had brought my own bottle over!
Once we where sorted, we jumped back on our scooters and set off clockwise around the Island. There is only one road that goes around the islands coast and in some parts there is also a second road inland that also encircles the island. Because of the rugged mountainous interior there is no road that crosses the island so it’s pretty easy to just drive around, as long as you stick to their speed limits of 30-50km/h

We got a little hungry so stopped off at a place called Charlies. It was just on the edge of the Akapuao Marine Reserve with views of the water and what looked like some yummy food! As we walked in, we saw customers being served big plates of delicious looking sandwiches so defiantly decided to stay.
I wasn’t super hungry so ended up ordering a Beef Burger along with a Fruit Smoothie which was delicious. Glen got the Steak sandwich which was huge and had to end up sharing with Nathan as he couldn’t eat it all. 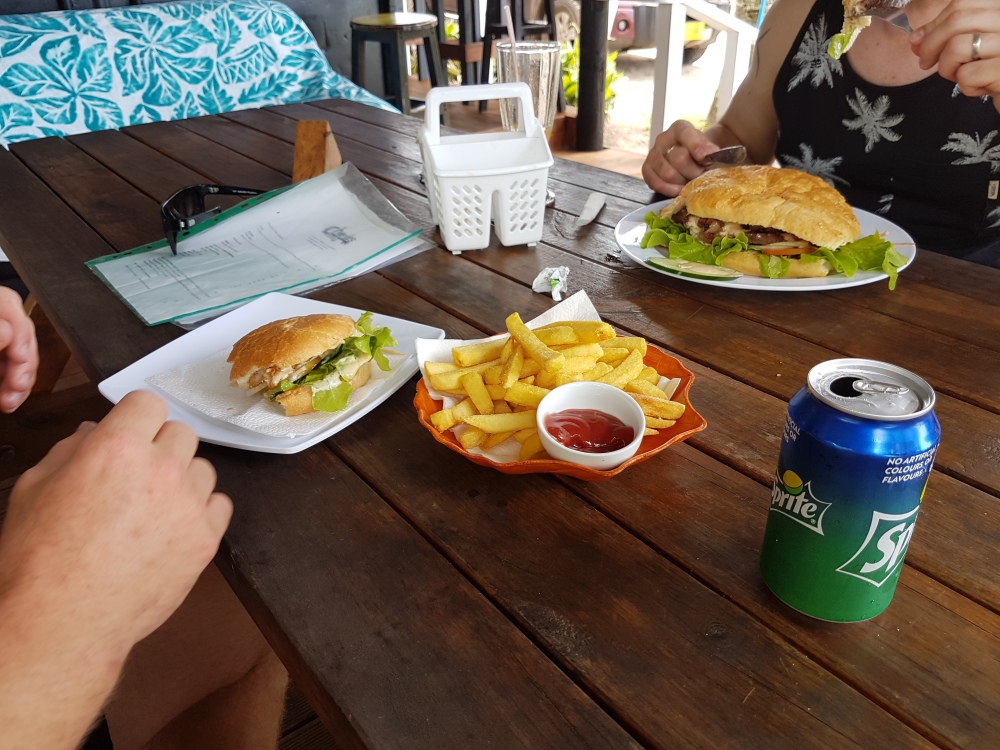 The water was too tempting after our lunch so we all walked down to the lagoon to dip our feet into the clear waters for the first time on our trip. It was so warm and beautiful but we weren’t quite prepared for a swim so agreed to head back later during the week for a proper visit.
We kept on with our Scooters and drove around the Island until we got to our resort. As our flight arrived at 6am that morning we where all pretty knackered so decided to just chill at the resort for a bit and have a look around. Castaway Villa had a pool, bar, small restaurant and was right on the beach so we all grabbed some towels and headed down to the beach to get some color on our skins and have a little paddle.
Unfortunately the  water near our accommodation wasn’t the best for swimming in. You could if you wanted to but there was lots of sea weed floating round that wasn’t too appealing, especially when you went underwater and you’d come up with seaweed  on top of your head. Instead – we took some photos on the GoPro then went back to our sun loungers for a good 5 minutes before claiming it was far too hot and jumping in the pool! 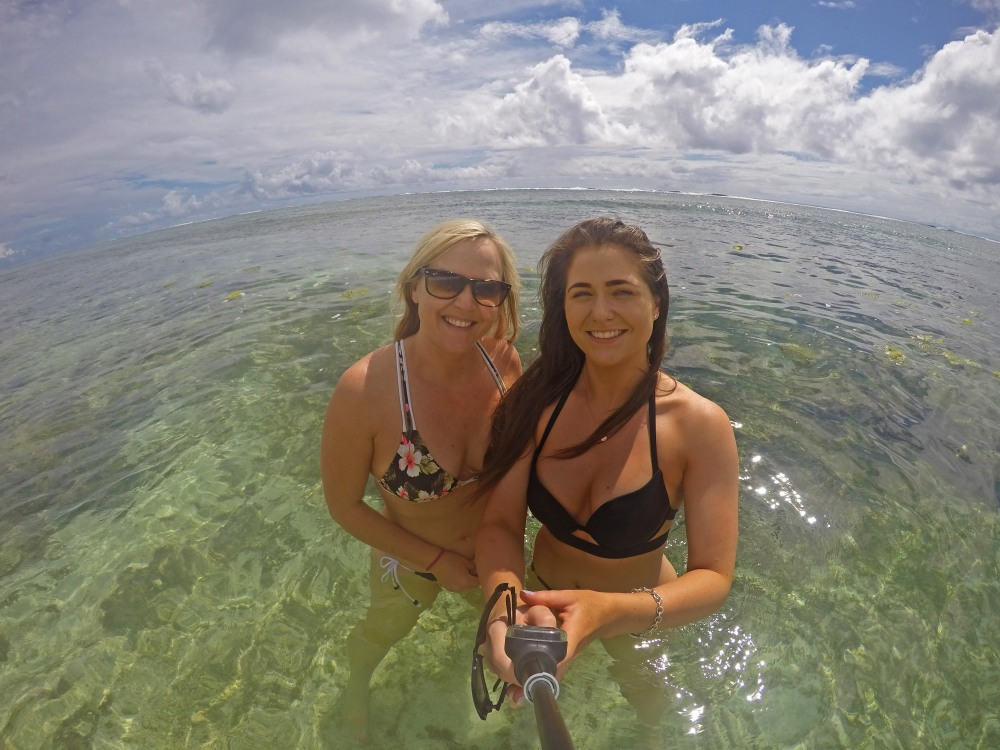 Once we’d had a bit of a cool off, we all went upstairs to our rooms and got ready to find a place for dinner. As it’s the quiet season in Raro, the restaurant at our accommodation wasn’t really packed and we didn’t really want to be the only ones in the eating area so we hopped on our scooters again and drove up near Muri Beach to find somewhere to eat. The first place that had a sign saying ‘Pizza’ we stopped at.
When we sat down, we thought we’d share 3 pizza’s between the four of us. We all assumed they’d be a bit thin so we’d demolish them no problem. We even ordered Garlic Bread to accompany our meal.
Our eyes grew when the waitress set down our pizza’s! They where so big and so so sooo cheesy. I had 2 slices and I was done. I’ve never had that much cheese on a pizza in my life, even when I traveled to America!

We sheepishly ended up asking for a box to take the pizza’s home in so we wouldn’t waste it and popped it in the fridge when we got back to our Villa. 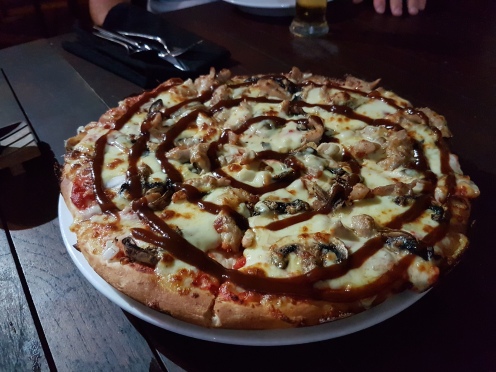 With tired eyes and very very full stomachs, we all went to bed (with quiet neighbors this time) and had a typical summer’s sleep with the fan going and the sound of palm tree’s outside out windows.
Tomorrow, it’s a day of snorkeling and more exploring!