We made it in time for breakfast this morning!
It was the usual fruit, cereal and toast ( 2 pieces of Vegemite toast for me please) before the three of us went to the reception to inquire about activities in Rarotonga.

We liked the look of this Village tour and Water Dancing Dinner so booked that through the resort for Tuesday night before trying on some snorkeling gear the resort provided to take with us to Muri Beach.
It had rained the night before and it was still a little bit cloudy in the morning but that soon passed before the sun was out and shining at a lovely 27°

While Kerri and Glen where getting ready, Nathan quickly taught me how to ride the scooter as I’d never done so before. It wasn’t as hard as I thought it would be but I defiantly wouldn’t be prepared for the streets of Thailand.
I can go in a straight line and speed up all good but I’m pretty bad when it comes to taking off smoothly. I ended up leaving the scooter duties up to Nathan on the way to Muri beach as I didn’t think I would do very well with him on the back of me.

We had asked at reception before we left and was told the best place nearby for snorkeling was at Muri Beach across from a shop called ‘Fruits of Rarotonga’. On the way we stopped off at the supermarket for some more water and I came across the biggest piece of Kumara I’d ever seen! (It’s also called a Sweet Potato for you overseas readers) I’m the biggest Kumara lover so this was amazing for me haha.

Once I’d made Nathan take a photo of me with a vegetable, we found the snorkeling location about 15 minutes drive up the road. We parked up our scooters, grabbed our towels and all our snorkeling gear then found a nice spot under some palm tree’s to set up for the day.

I was pretty keen to get under the water so I was in there straight away. Annoyingly though, my goggles kept fogging up (even after doing the whole spit your saliva into them trick) so I wasn’t under the water for very long before having to come back up again. The water however was wonderful, Rarotonga is surrounded by a nice lagoon so it’s really easy to snorkel and swim in without being pounded by waves or murky water. 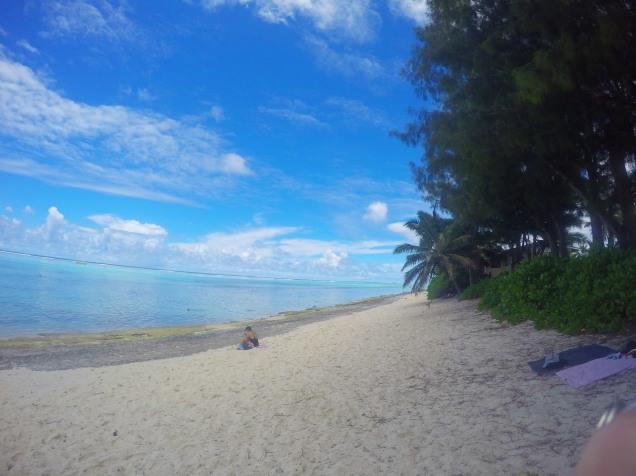 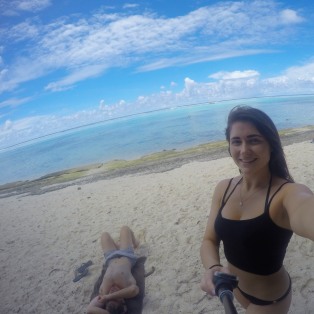 Nathan joined me in the water soon after I’d gone in and we swum around the coral reefs for a bit and took picture and videos on the GoPro. Not without injuring ourselves though, Nathan scratched his hand and I got a graze on my knee from the reef. Thankfully I had some prescription cream I brought with me to put on them that afternoon to keep them from getting infected. 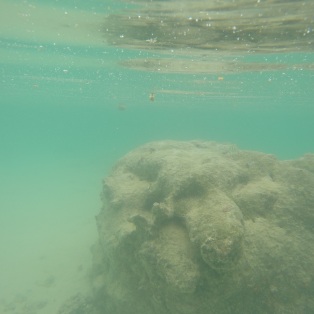 We where in the water for around an hour before getting out and laying our towels out on the sand.
The clouds had formed a bit and it wasn’t as sunny as it was before so I didn’t put any sunscreen on. We where under a palm tree anyways so I assumed I would be protected from getting burnt. Turns out I was wrong and I went to bed that night with the worst sunburn! – but more on that later.
Being the typical tourists that we are, we took some more pictures on the beach and also being typical girls we then complained about how gross we looked while the boys rolled their eyes at us.
Now that I’m uploading them however, we brushed up quite well! 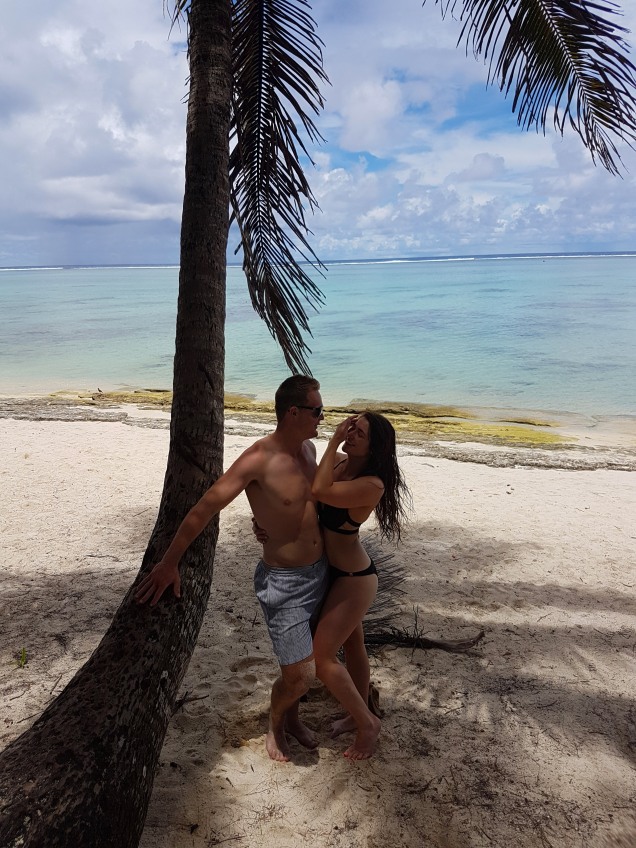 As it was Sunday, many places where shut in Rarotonga so we went back to the resort for lunch. If you read my previous post, you’d remember we ordered about 3 massive pizza’s the night before that we couldn’t get through, so we re-heated them up for lunch instead and ate them while sitting next to the pool.
The bar at the resort wasn’t open, so Nathan collected our bottles of Vodka & Bourbon from our room and we took them downstairs so we could drink them while we swum. He was our own personal bartender for the afternoon! 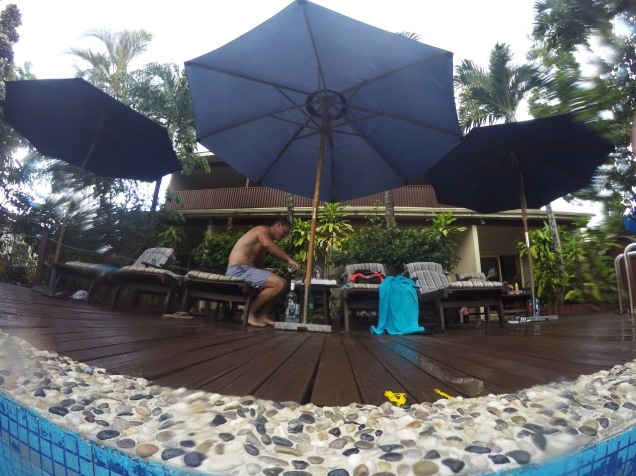 The next few hours where spent drinking, swimming, lying down with a book and more drinking.
Around 5pm, it begun to get close to dinner time so Kerri & I headed upstairs to make ourselves presentable for the BBQ dinner the resort was providing.
This was when I realized how bloody sunburnt I was! The whole back of my legs where turning bright red and it hurt to touch. It’s crazy how it takes a little while for a sunburn to actually show instead of right away 😦

Thankfully Glen had some aloe vera from when he got sunburnt the previous day, so I put that on my legs to cool them down a bit.
Just before we headed downstairs for dinner, we all took some Vodka shots and as I had been drinking for most of the afternoon, I started to feel a little giggly when we got to dinner.
We where told in the morning from the restaurant staff that the BBQ was on the resort’s beach so Nathan and I walked ahead of Kerri and Glen to the beach where we where then told that we had to go back to the restaurant to get the food.
We turned back and told Kerri and Glen that the food was inside (as they hadn’t made it to the beach yet) so we all went in and loaded up our plates with the BBQ buffet. Suddenly, Kerri and Glen take a seat inside (where no one was by the way) and so I assumed in my fuzzy little state that they wanted to sit inside instead of out on the beach with everyone else.
Finally, after we’d all eaten and had dessert, Kerri said something like “I feel bad, like we’re the only ones who turned up for the BBQ and the chefs like made all this food”
Me and Nathan looked at each other and were like “Oh what – no, everyone else is on the beach having dinner”
Kerri looked at me in shock – “WHAT! We thought you said the BBQ was inside!?”
Me – “Yeah, the food is inside but everyone else is sitting at tables on the beach while they listen to live music”
Kerri and Glen couldn’t believe it. They assumed no one had turned up for the BBQ apart from us and a couple of other people they saw who came into the restaurant – who actually just came in to fill up their plates then head back outside.
They couldn’t believe we didn’t tell them everyone was outside!
Me and Nathan honestly assumed they just wanted to sit inside and eat hahahaha.
We all got up then and headed outside to the beach but by this stage the music had finished, everyone had finished eating and there where just a couple of tables of people left. Woops!

It’s funny because I was GoPro-ing us going to the buffet dinner and I’ve watched the video back and there’s even footage of me going to head outside with my plate of food and then seeing the others sit down at a table and saying to myself “Oh, guess we’re sitting inside then”

Oh well – just a mis-communication.
Even though we missed the sunset and the music, we still enjoyed our meals and defiantly got our $40 worth of food haha.