Today I nearly slept in as I accidentally set my alarm for Thursday instead of Friday (Today) 😯
My hair is in need of a wash but i only just washed it the other night so I tied it up today and had a quick shower then headed off to Alcatraz.
I did stop in the common room this morning to grab my 1/2 cup of Orange juice I seem to be having every morning haha. While I’m there I met an Auzzie guy for a brief moment that seemed cool but I was in a rush so had to leave before I could make another San Francisco friend.

I’m glad I booked my ticket to Alcatraz island a few months in advance! The lines were so long for people hoping to get a ticket. The Auzzie guy Matt told me later that he went to try and get one and found out people had been queuing from like 3am trying to get a spare ticket. So if you’re ever thinking of going to San Francisco and Alcatraz is on your bucket list – go here to book one in advance. 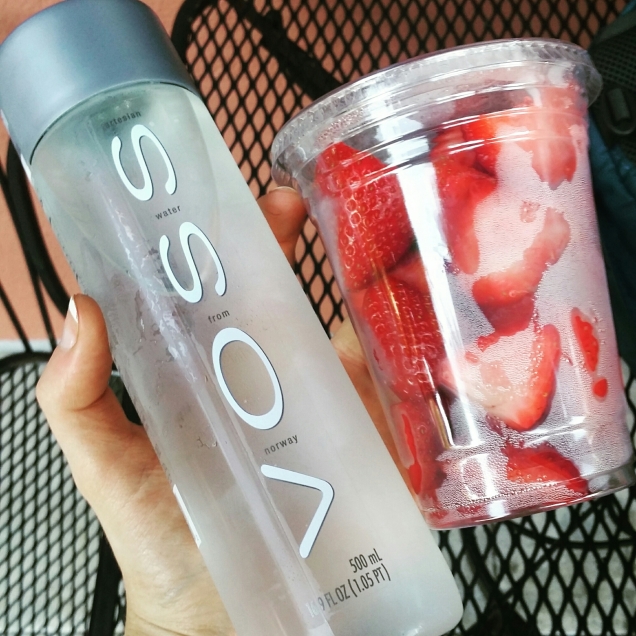 I arrived at the ferry terminal around 8am (after stopping off to get some water and strawberries for breakfast) and had to wait until nearly 9am to board the boat and head to the island.
When the ferry arrived at Alcatraz Island a park ranger (as Alcatraz is considered a national park) talked to us all at the beginning about where everything kinda was and some ‘rules’ about the park. To be honest, her talk went on for far too long that it actually got really boring so I walked off on my own and started the audio tour. This slightly worked in my favor as I was ahead of everyone else and didn’t have to wait for people to move in front of me to look at stuff. 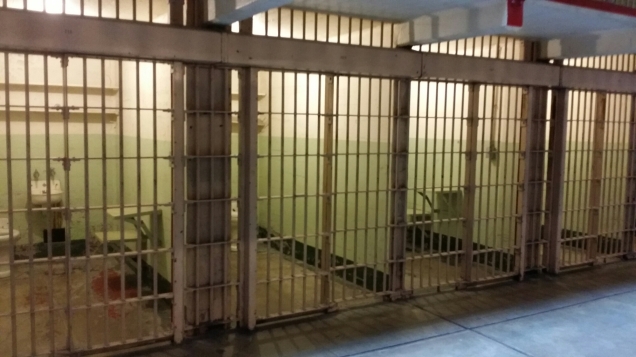 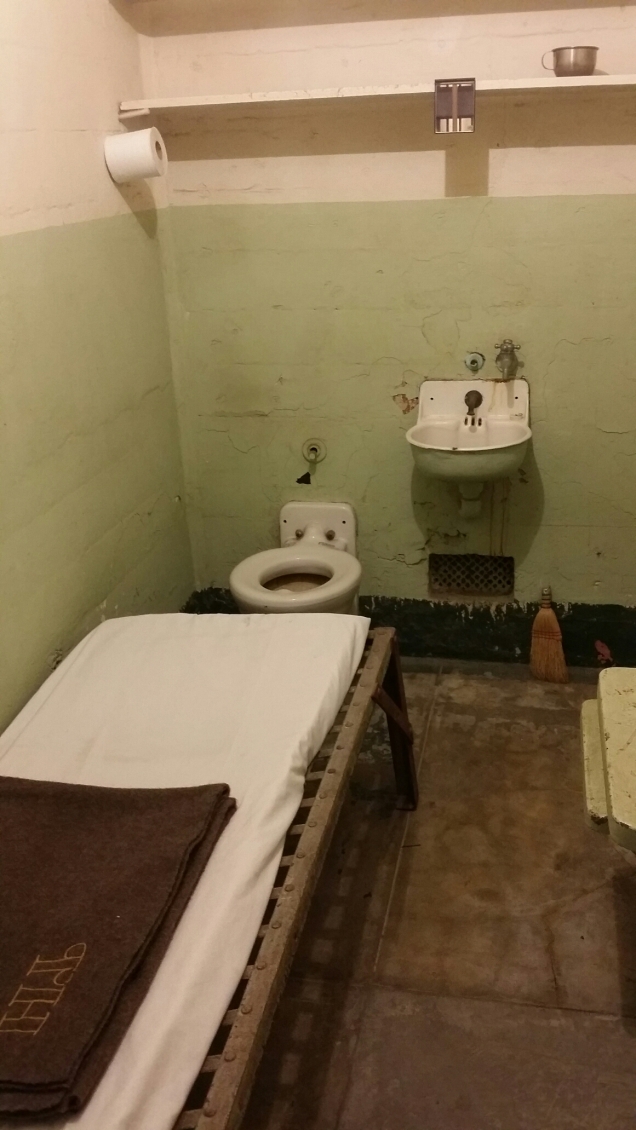 Basically when you walk in, you’re given some headphones and a little audio player and you listen to the history of Alcatraz. They also had 4 inmate recordings in the audio piece talking about their time at the Prison which was interesting to hear from their perspective.
The first part I saw was the cells in B & C block. Each cell was about 5 feet by 9 feet (so not very big) all they had was a small sink with cold water, a bed and a toilet. The cells in D Block (segregation) were more spacious, but the inmates were in their cells 24 hours a day with only 1 day a week allowed for going out into the courtyard or something and even then they had to be alone. I think they were for the really bad people… 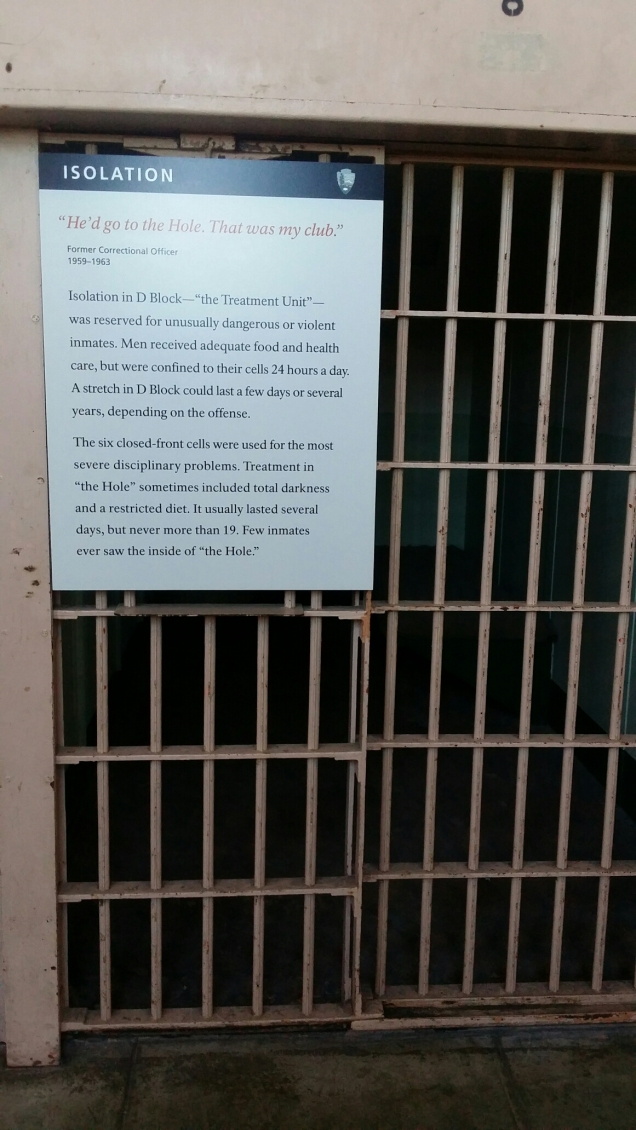 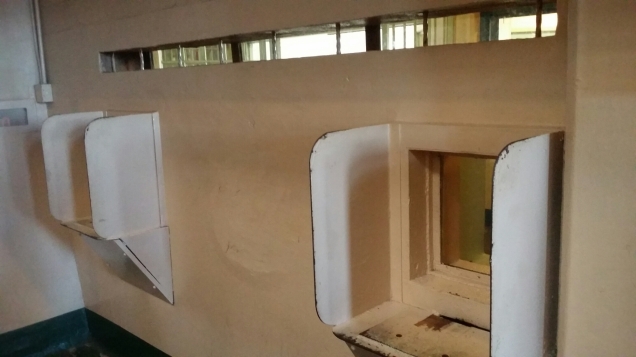 In the picture above, is the visiting area. Well, more like just a window to look at the person on the other side. Prisoners were allowed 1 visit per month but it had to be approved by the warden and they couldn’t have any physical contact with that person. They wernt even allowed to discuss prison life or any current events as it was monitored by a correctional officer the whole time. 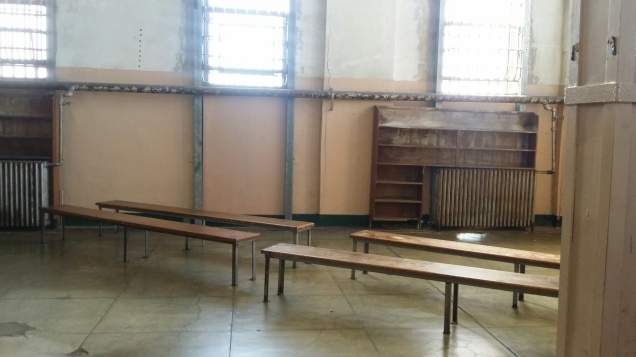 The above picture is the library. The inmates weren’t allowed in there though, they just had a catalog of books to choose from that they could order from the Librarian. 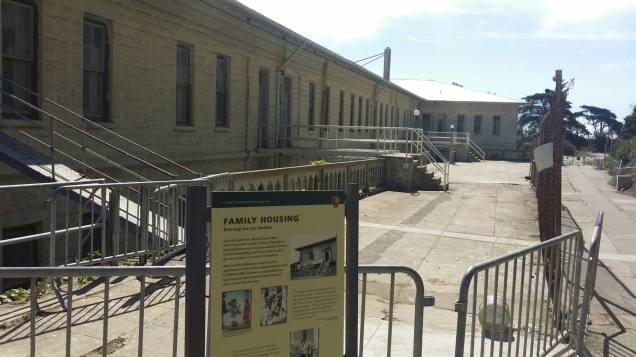 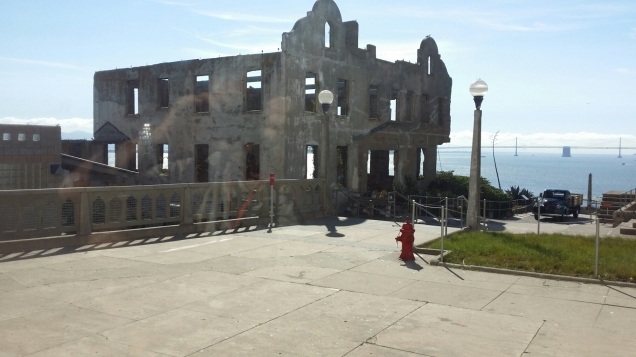 As staff had to work on the island, their families lived on the island with them. A woman actually wrote a book about life growing up on Alcatraz that I saw in the gift store. At one time there was about 300 people living on Alcatraz island at one time, including wives and children.
There was a large duplex, and four large wooden houses for senior officers. I even heard they had their own bowling alley, dairy and soda fountain shop for the younger ones. They got most of their shopping from the mainland though and it was all ferried over. 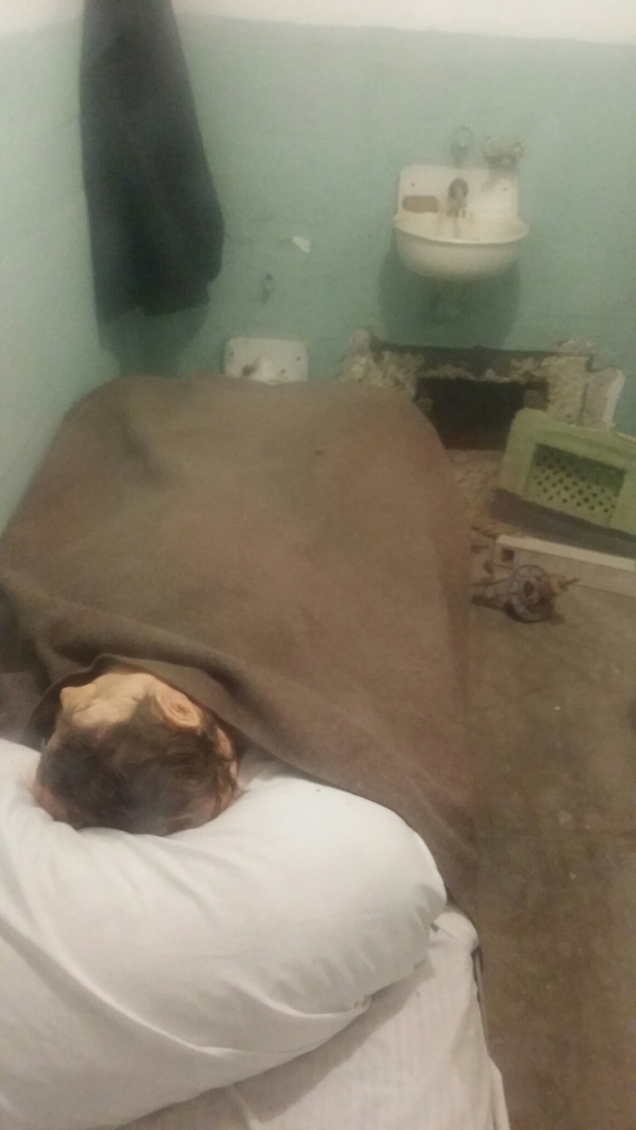 What I found interesting is the 3 people that escaped from the prison.
Before them, there were people who tried to escape. One guy tried climbing the wire fence and was told to get down but didn’t so he got shot and fell into the shore and died.
Another few guys escaped out of D Block and tried to makeshift a raft together but were spotted.
The last 3 guys who were never found had chiseled away at the moisture-damaged concrete from around an air vent leading to a corridor, using tools such as a metal spoons soldered with silver from a dime and an electric drill improvised from a stolen vacuum cleaner motor. The noise was disguised by accordions, played during music hour (about 1 hour and a half), and their progress was concealed by false walls, which, in the dark recesses of the cells, fooled the guards.

The escape route then led up through an air vent, large enough for them to climb through. To trick the guards into thinking they were still in bed they made paper mâche heads in their cell (as shown in the above picture)
Pretty crazy! No one ever knows what happened to them. Most likely they drowned in the water trying to escape.

Anyways, I’ve talked so much about Alcatraz I’ve probably ruined it for anyone who actually wants to go.
The tour itself is around an hour i think.
I got back to the mainland about 11am so much earlier than I anticipated.

As I had time to spare, I decided to take another look around Fisherman’s bay and Pier 39. I went the night before with Kathy & Ross but I only did a bit of a browse with them and didn’t realize how big it was, even if it is full with tourists I still loved it 🙂 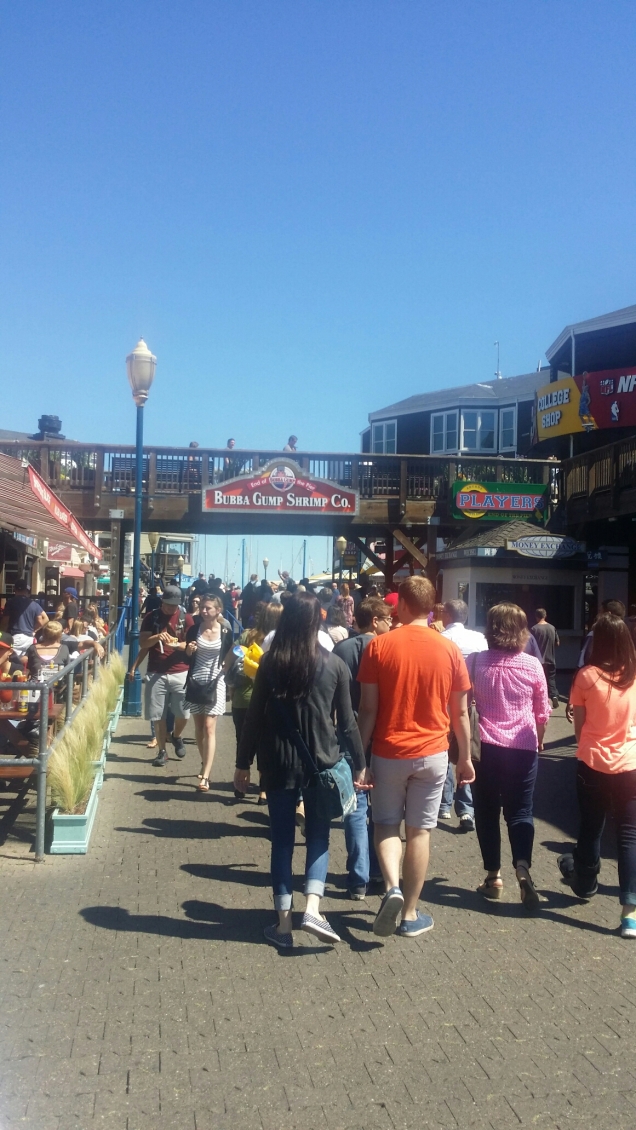 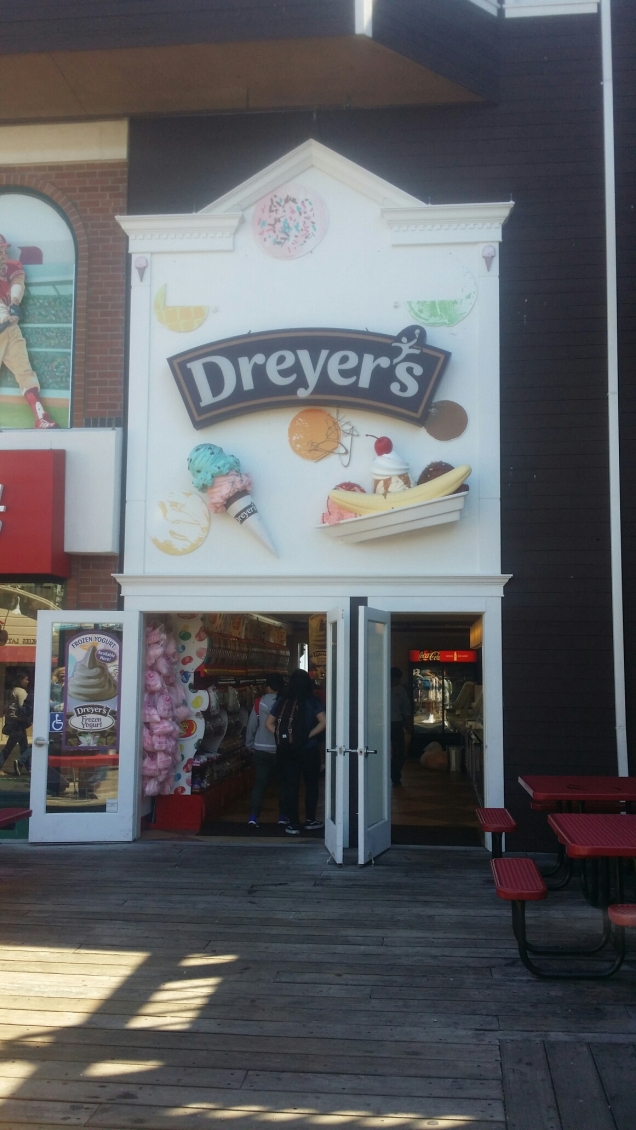 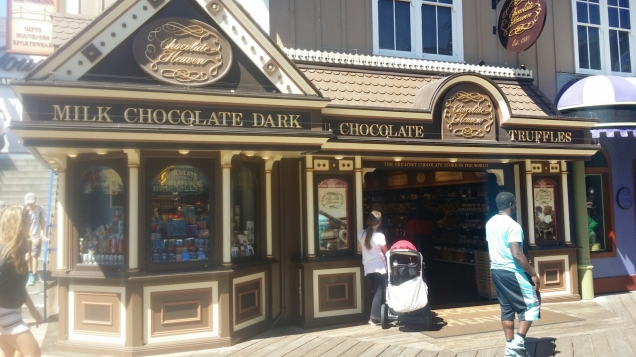 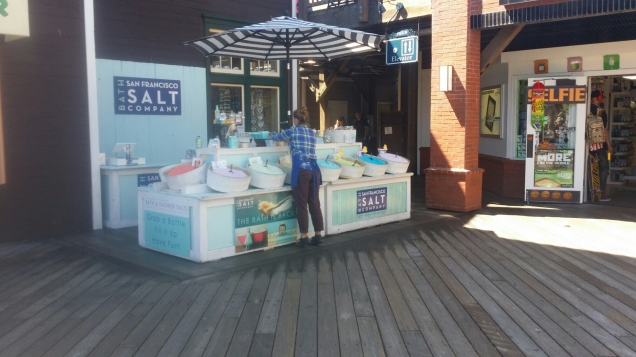 I went to this bath salt stand and got a plastic bottle to make my mum a little bath salt gift as she loves baths!
Now that I’ve made it, I should mail it home because it’ll get annoying in my bag. That’s the thing with travelling for 3 months, I feel I don’t want to buy too much because of having to carry it around 😯 Edit: I did end up carrying this around with me for my whole month in America and ended up sending it home when I was in NYC. It now sits in the bathroom a year later having not been used. Thanks Mum. 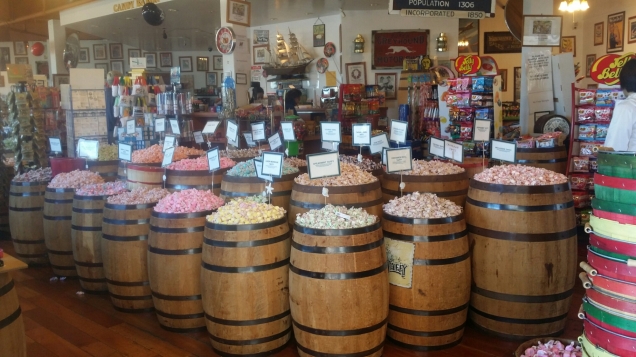 I also went to this candy store and got lots of different flavors! I was meant to share with Nathan when I got home but I’ve already had a few…
(By the way, I was on a lolly ban this year until I went on my trip so I’m officially allowed all the candy in the world!) 🍬🍭🍬🍭 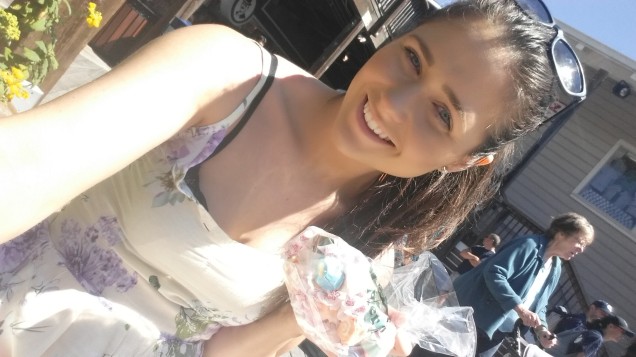 I also tried a Corn Dog for the first time. I did think half way through eating it that I’m sure hot dogs aren’t meant to be a white colour but whatever…. 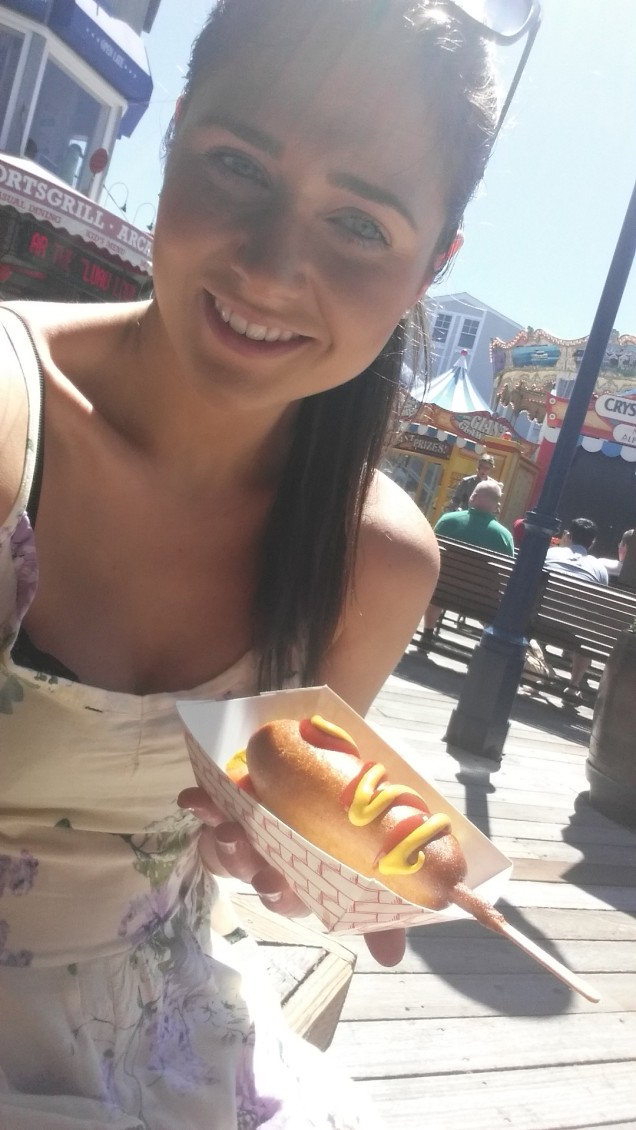 Look at me taking all these selfies by my lonesome! Hahaha 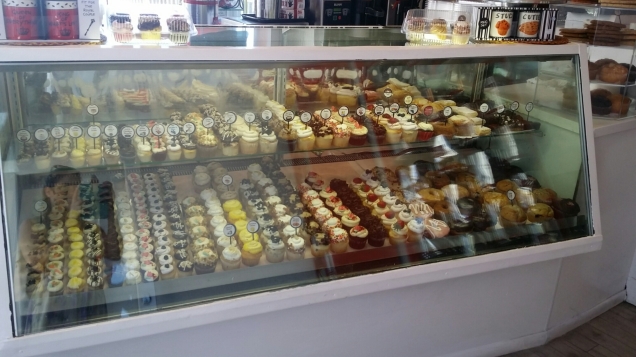 Also saw the yummiest cupcakes! But I didn’t buy any 😩 Trying to save money and my figure haha. 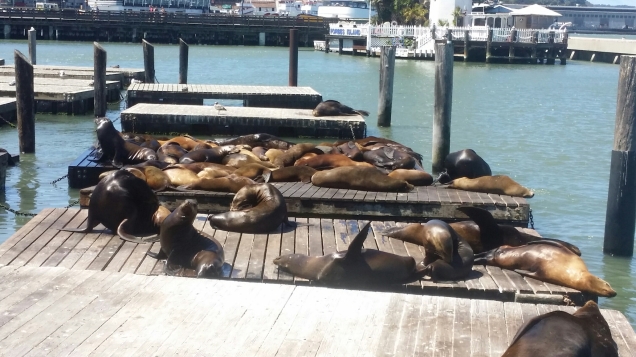 I watched the sea lions on the pier which was quite funny to watch as they kept pushing each other off the dock.
By this stage it was about 2pm so I headed back to my hostel.
I love how SF is so easy to get around! Like once you know the main streets I swear you don’t even need a map anymore.
I did notice tonight before I went to bed I got sunburnt shoulders so I better buy some sunscreen ASAP 😦 I don’t want to be pink for my whole trip!

After chilling at my hostel for a bit, and nearly falling asleep, I went for another walk and went to a church which was really nice inside. 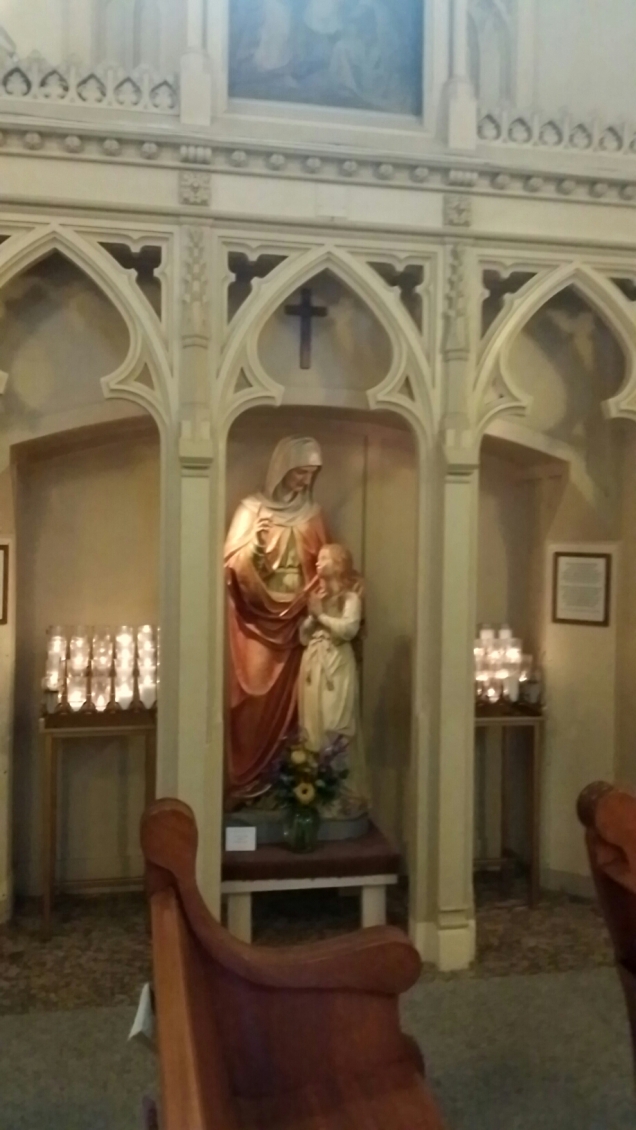 I feel I’ve been for like 5 different walks today, no wonder my feet and back are sore! 😥😥
I knew my hostel was throwing a free dinner tonight but I felt like Mexican food so I went in search of a place and ended up with this… 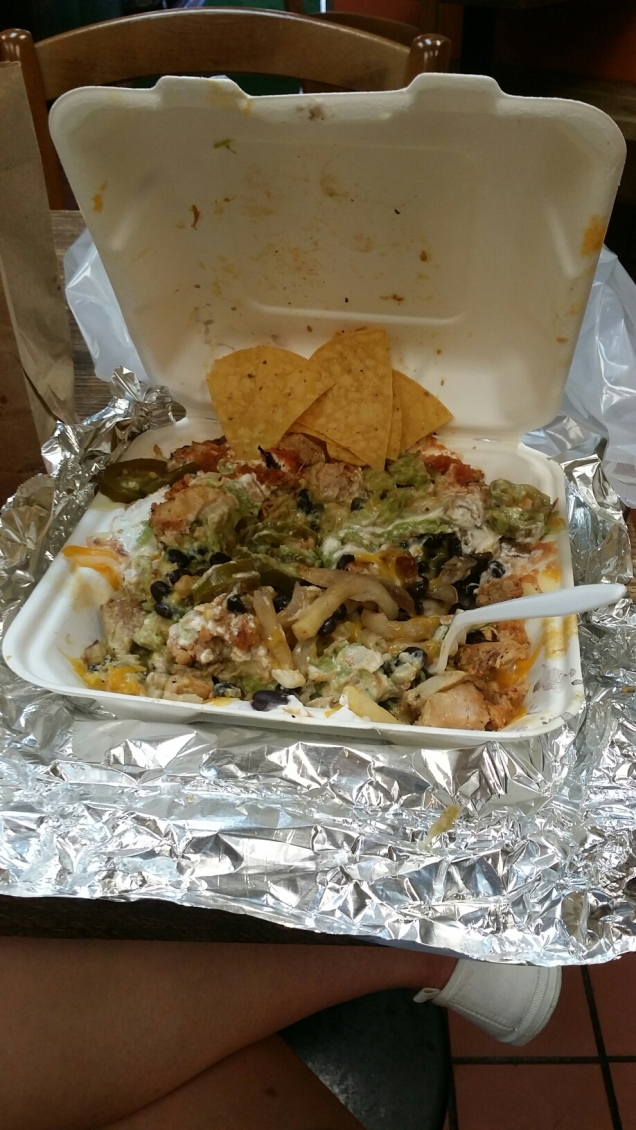 And this is the picture of my finished meal!!!
That’s how much I couldn’t eat it.
It was just way too much. It’s meant to be nachos, but it’s literally french fries covered with sour cream and salsa and guacamole, grilled chicken, jalapenos and cheese. While I was waiting for it to be made I was snacking on corn chips they give you when you order and a small Fanta (which was a large in NZ terms) so I was not at all hungry when it came to my main meal. 😧

I felt bad I couldn’t finish it all, I did want to but I also didn’t want to stretch my tummy!
When I got back to the hostel I sat with the Auzzie guy from this morning and the 3 Italian guys I met my first night I was here.
The Italians were going out tonight but I am so incredibly tired I’m in bed writing this blog instead.
3 of us did venture out before however and bought a tub of Ben’n’jerrys ice cream to share. NOW my tummy is officially stretched.
They’re leaving tomorrow though so it’s good I’m hanging out with Kathy!
She emailed me today and we’re going to go to the Golden Gate Park tomorrow  as well as the Botanical gardens, Museums and Union square (as I need to find a dress for Vegas)
It’s crazy how people come and go so quickly at the hostel but I guess that’s the joys of travelling.
Already, those Aussie girls in my dorm room have left from yesterday and now there’s 2 new Korean girls here. They’re nice 🙂 I showed them my video of the sea lions from today.
I don’t feel like such a Nana now as 4 out of 5 of us in the dorm room are in bed sleeping (well I will be soon)

Anyways, now that I have bought a SIM card and have unlimited data this blog should upload without any dramas! 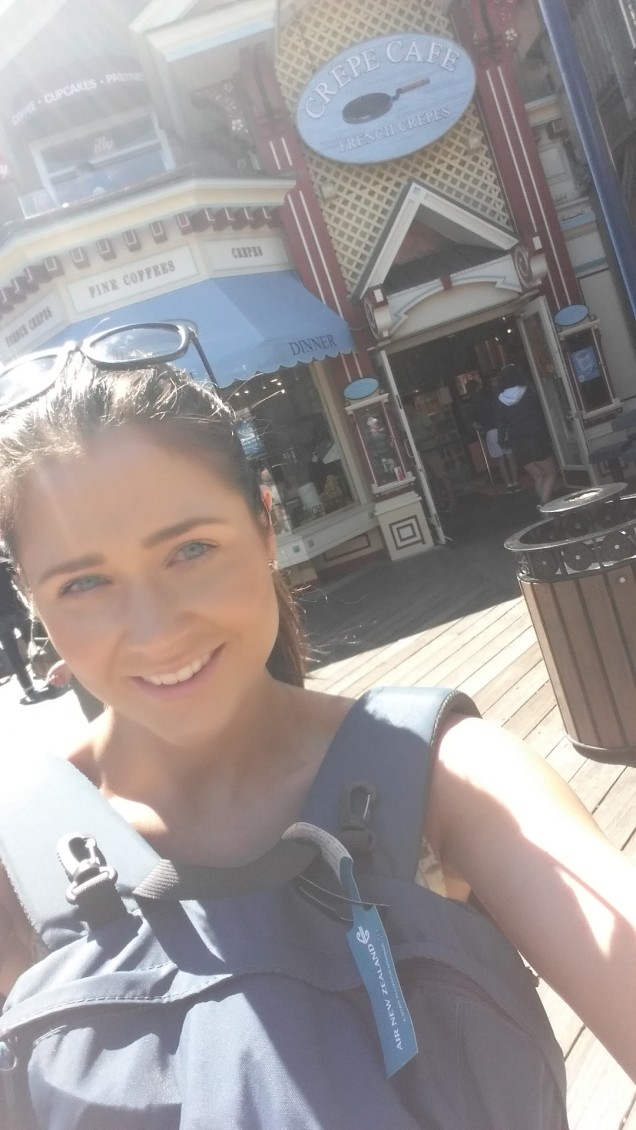