Last night I spent like an hour writing a blog and for some reason when I exited out of it, it didn’t save!!
What a waste of staying up late for nothing 😭😭
I’m currently in an Uber on my way to Venice Beach so I thought I’d try and attempt to wrote it again but I’ll probably go into much less detail.
Yesterday I spent the morning shopping. I mainly stayed in Victoria Secrets and I bought my body scrub I’d been wanting!
They had 5 toiletrie items for $30 so I ended up buying 5.

There’s only 4 in that picture as the scrub I was using is in the shower haha.
I gave my legs a really good scrub last night to get rid of some built up fake tan 😯

I also bought 2 bikinis from VS. they’re both black (very adventurous I know)

This is one of them, I must say I’m looking so fab in that picture I just had to upload it….
They didn’t have the bottoms however so I just bought another black pair that matched it. If I see the other pair I’ll probably buy them.
I also bought another bikini but I couldn’t find a picture online of it. 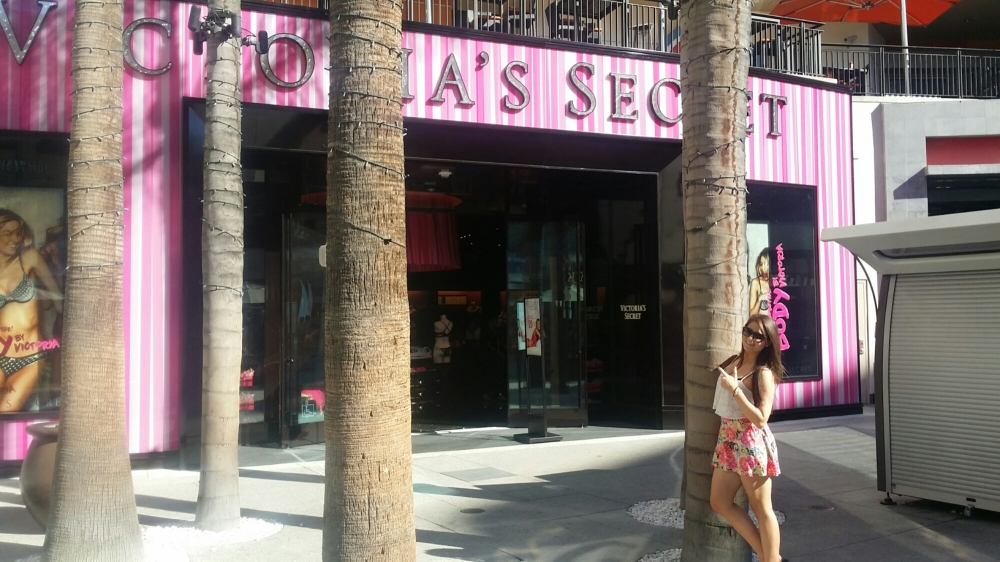 While I was in VS, Kevin from my hostel messaged me to ask where I was as the bus for Warner Bros was leaving soon and we were meant to be going together.
We ended up missing that bus but we just ubered so it wasn’t too bad.

Warner Brothers studio for anyone who hasn’t been there, is a working Film and TV set. It’s not cheap, about $64 per person, with tours running all the time from 8am-4pm. For 2 hours. 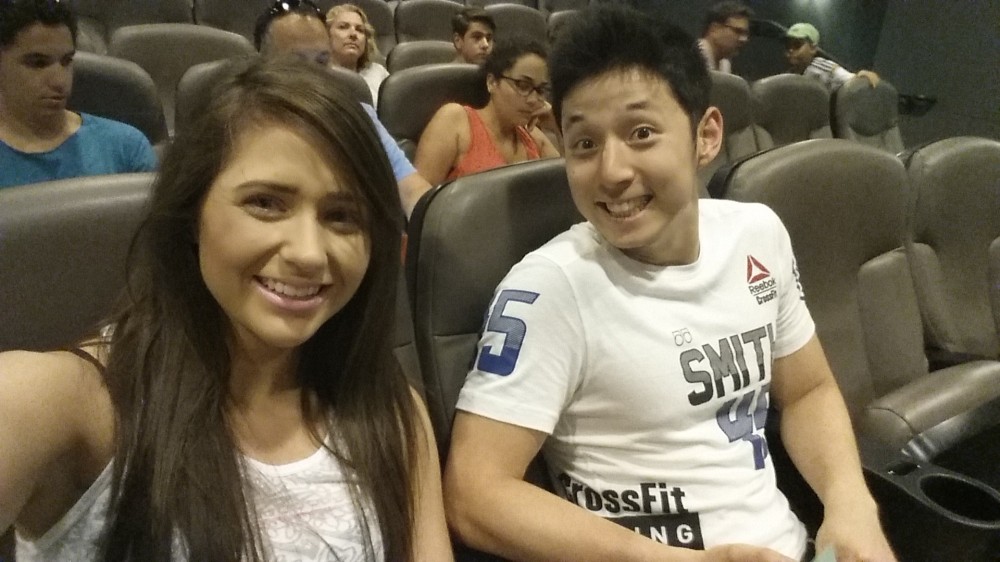 When we got there, we watched a 7 minute film introducing the studio and its history and then you’re escorted by a Warner Brother host onto 12 person caddys for your tour of the studio property.

At several points in the tour, you get to leave the caddys and walk around to take pictures etc.

(Me outside one of the Pretty Little Liars house) 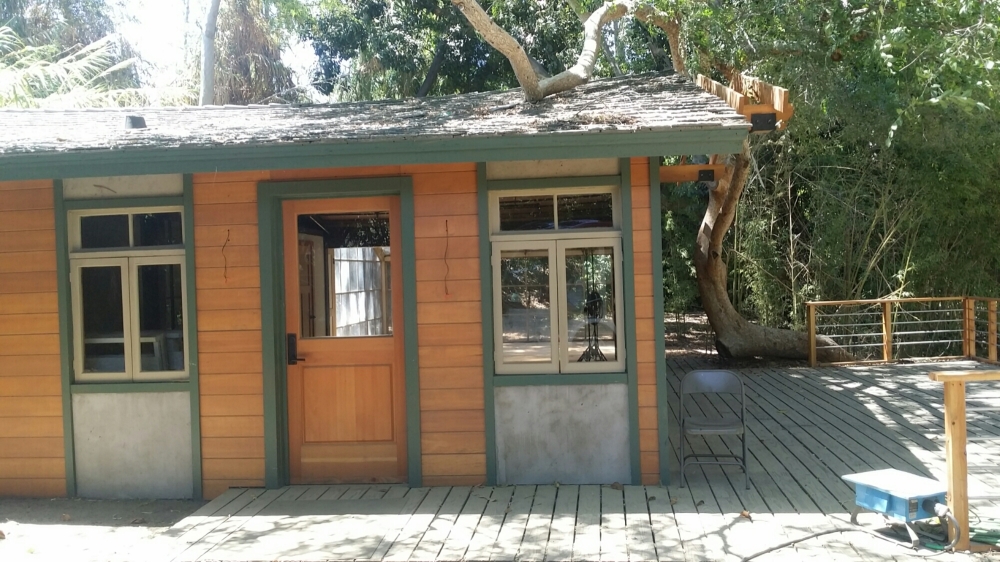 They use this house in several TV shows Apparantly but I can’t remember what.

In Friends when Phoebe visits her dad at his home. This was the house they used 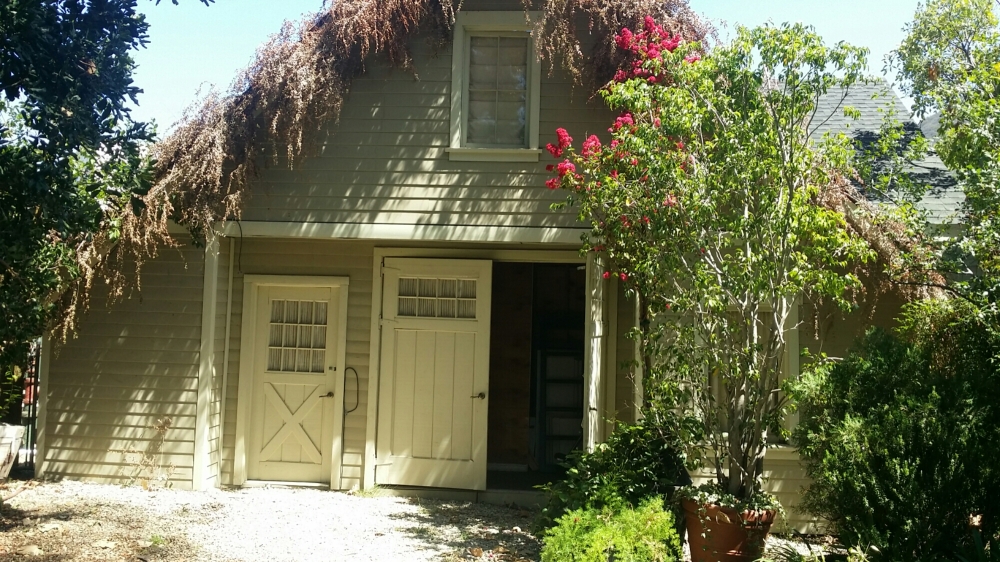 The shed in Pretty Little Liars

The ghost whisperer was filmed at Universal but in the last season they had a fire so they filmed it at WB. They used the red house as the antiques store if anyone used to watch that show. 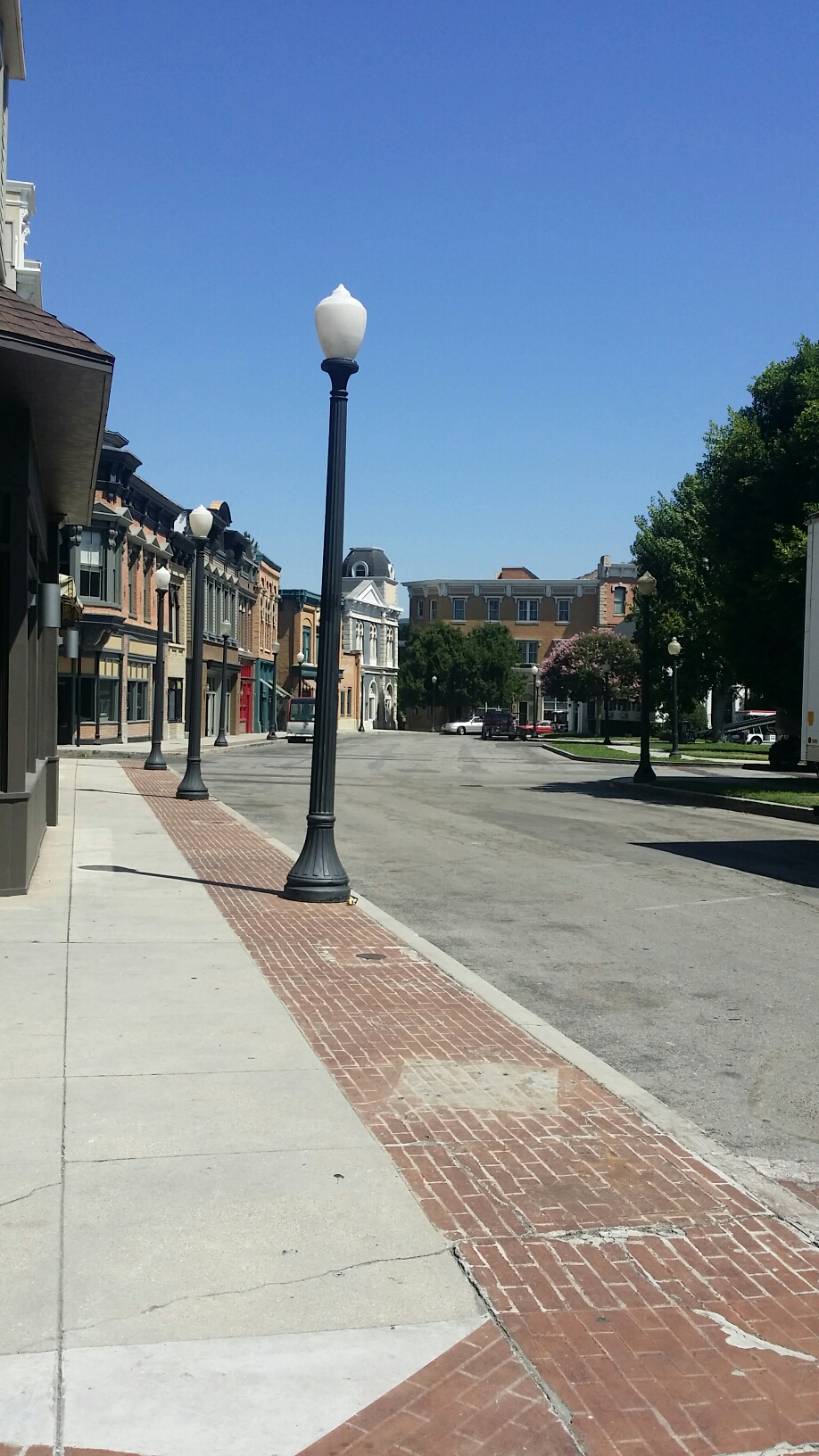 They’ve also used this street in heaps of films. 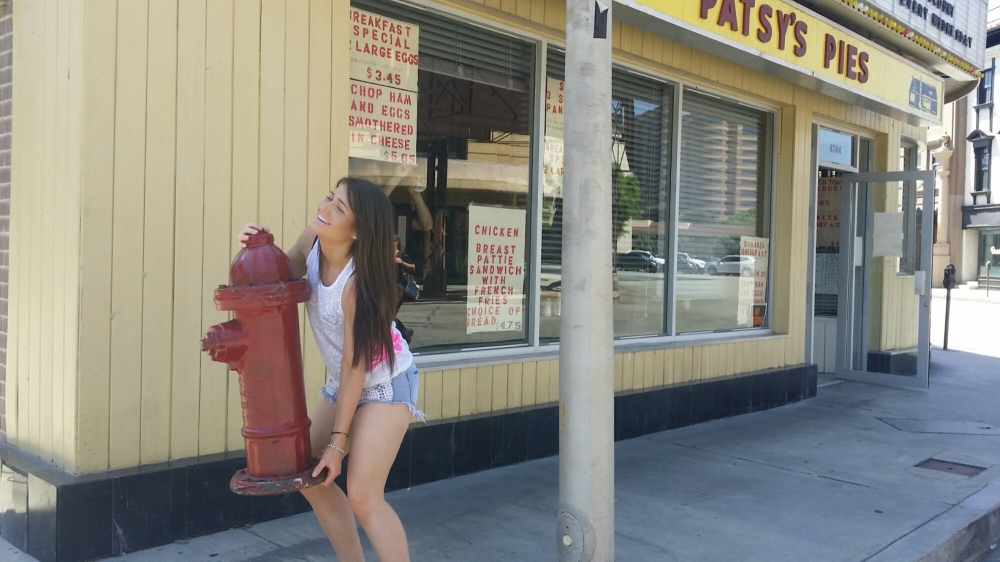 To be honest, Warner Brothers wasn’t really my thing. I dont watch that much TV unless it’s trashy reality TV Shows. Eg, Teen Mom, Catfish and some E! Series shows. I’m very educational I know.
I also have never seen the Harry Potter series, wizardry isn’t really on the top of my to-do list. (Yet Twilight was at the time haha)
And Batman gives me no thrills.

Obviously if you love that stuff you’ll love the museums they have specifially for that. And the garage they have with the automobiles from Batman.

Alot of TV series have been filmed here at WB in LA.
Everything from The Big Bang Theory and F.r.i.e.n.d.s (which I did love!), Pretty Little Liars (which I actually started watching as I knew I was going to do this tour and it’d be in it), Gilmore Girls, Hart of Dixie, Vampire Diaries, True Blood, Everybody loves raymond, ER and hundreds more.

It’s one of the top voted things to do in LA so I’m assuming it’s just me that wasn’t screaming for joy on the tour.

I did enjoy getting my picture taken at Central Perk however ☕ 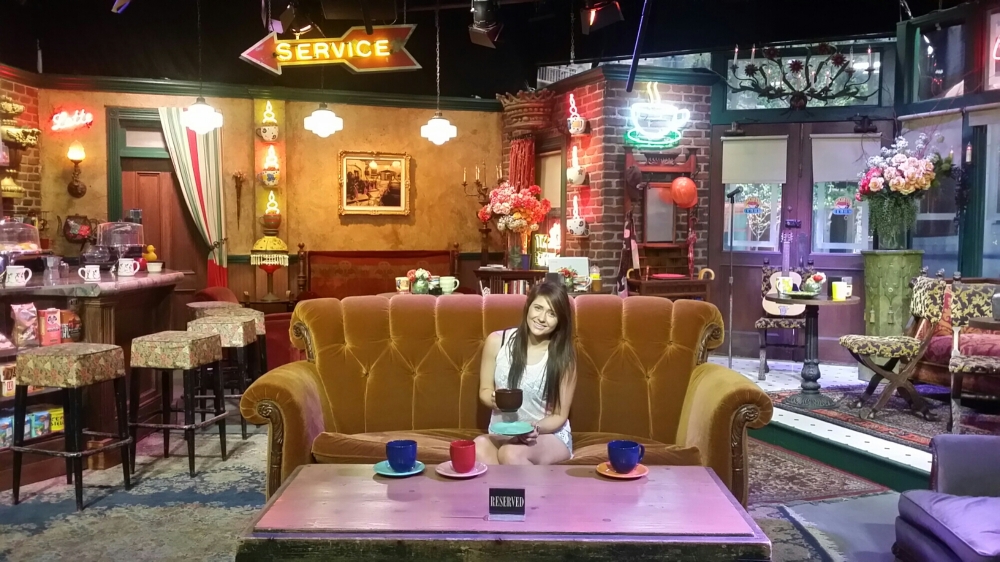 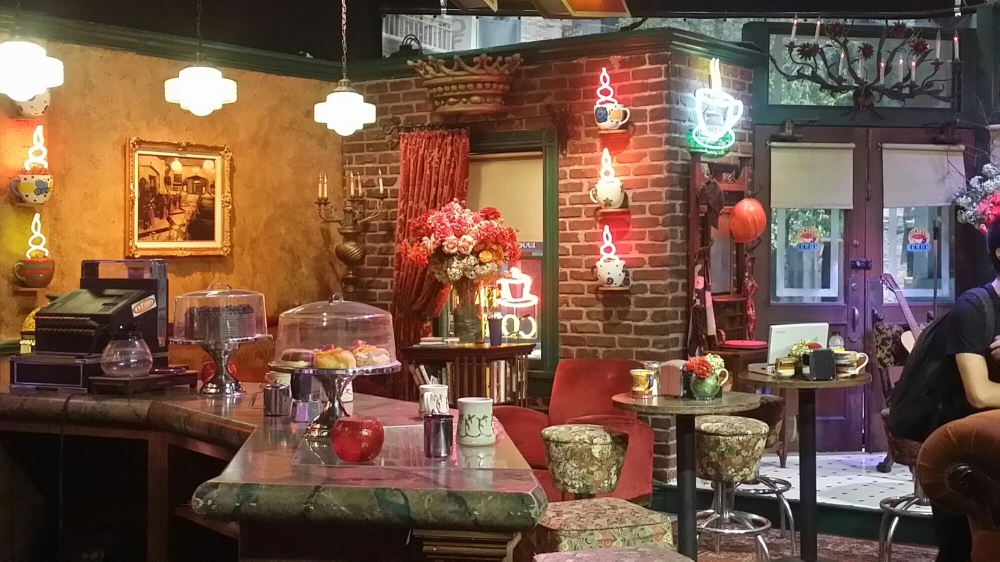 And me and Kevin got pictures taken at this set where it looks like one person is bigger than the other which is pretty funny. 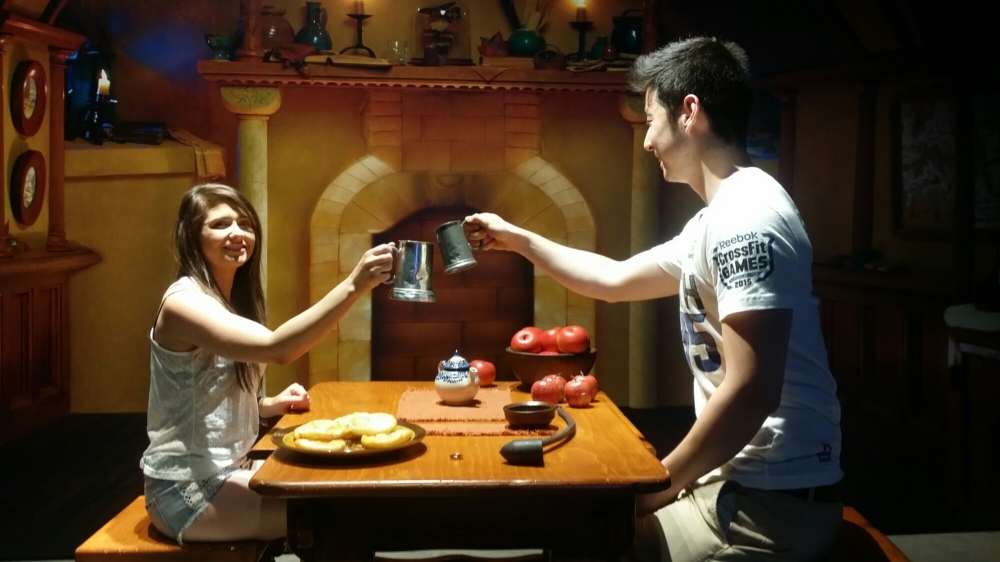 When we had finished the tour we both grabbed a drink from the actual central perk they had next to the gift shop. 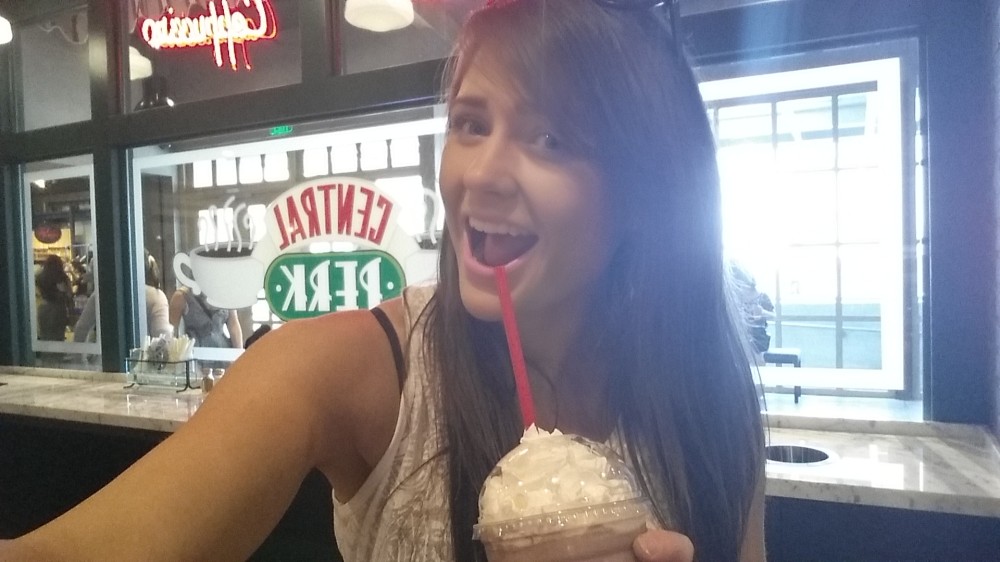 It qas a Very yummy chocolate iced thing I had!

After we had drunken our drinks we headed to the bus stop and took the bus back to our hostel.
The buses are really easy to take in LA by the way. It only costs like $1.80 as well. It’s just a very ‘Un cool’ thing to do as everyone would rather drive.

When we got back to our hostel a few of us walked down to Walgreens – the supermarket and got some alcohol. My drink of choice was cider and I ended up playing against Scotland in the tournament. 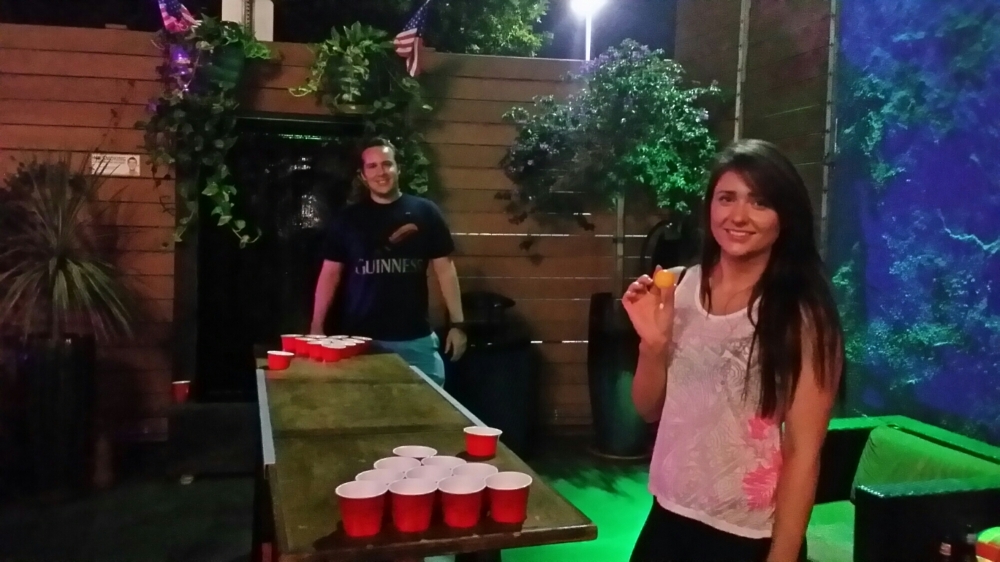 When I’d lost beer pong, we all headed down to hollywood boulevard and got some free gelato from Bruno I think it was called.

Then I headed off to bed and scrubbed my body like crazy with my new VS Scrub. And then came to bed last night to write this blog which got deleted and have just done again. *sigh*
It’s gonna be a double post tonight as I don’t want to run a day behind!!