Tonight is my last night in my hostel before I stay at a Hotel tomorrow night getting ready to start my contiki!

I woke up this morning bright and early and joined in on breakfast for the very first time. There was unfortunately no bagels but they did have a selection of porridge and do-it-yourself pancakes.
I made some chocolate chip ones with banana on top but when I sat down with them I could only have a few bites before I felt sick.
Breakfast isn’t really my thing…

I’d signed up to take the free shuttle at 10am to Santa Monica beach this morning from the hostel but as I was one of the last people who put their name down I missed out 😥 and was put on the ‘wait list’ for the shuttle that left at 12pm!
The 4 people I was going with had to leave me behind so I Ubered with 2 other guys instead who were in the same situation as me.
It was like an hours drive away but only cost us like $12 each which was alright.

We ended up being dropped off at Venice Beach which is like half an hour walk away from Santa Monica but my friends were walking to Venice anyways so it all worked out.
One of the guys in the Uber ended up sticking with me while I waited for my friends and for the rest of the day.
We lost him when we were about to leave and now that I think of it… I haven’t seen him since.
His English really isn’t that good so I hope he got back to the hostel all good 😯

When I met up with everyone we went and got some lunch. 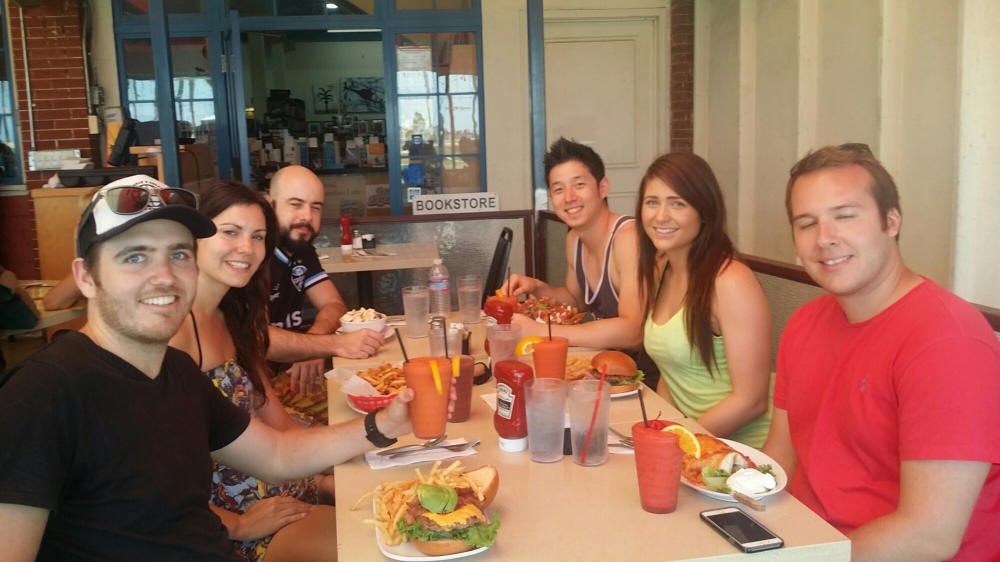 I got a basic hamburger and fries. And yes, I didn’t finish this meal either. 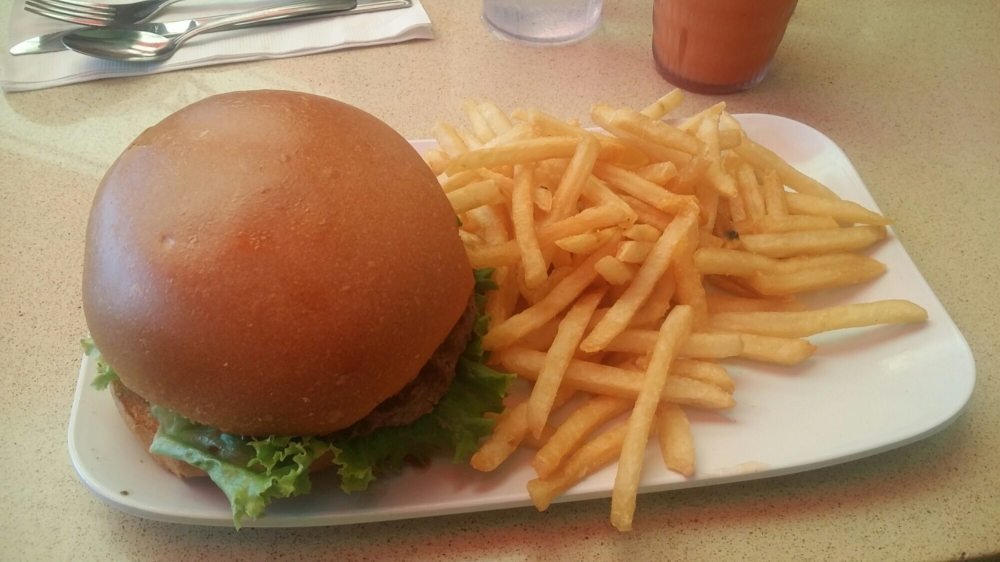 I must say, the bread tastes a bit different over here. Like, not as fresh…

When we’d finished eating we walked to the skate park and watched some locals skate.

Then it was off to Muscle beach where all the famous body builders apparantly work out. Or have done so in the past.
We of course had to take some muscle photos. 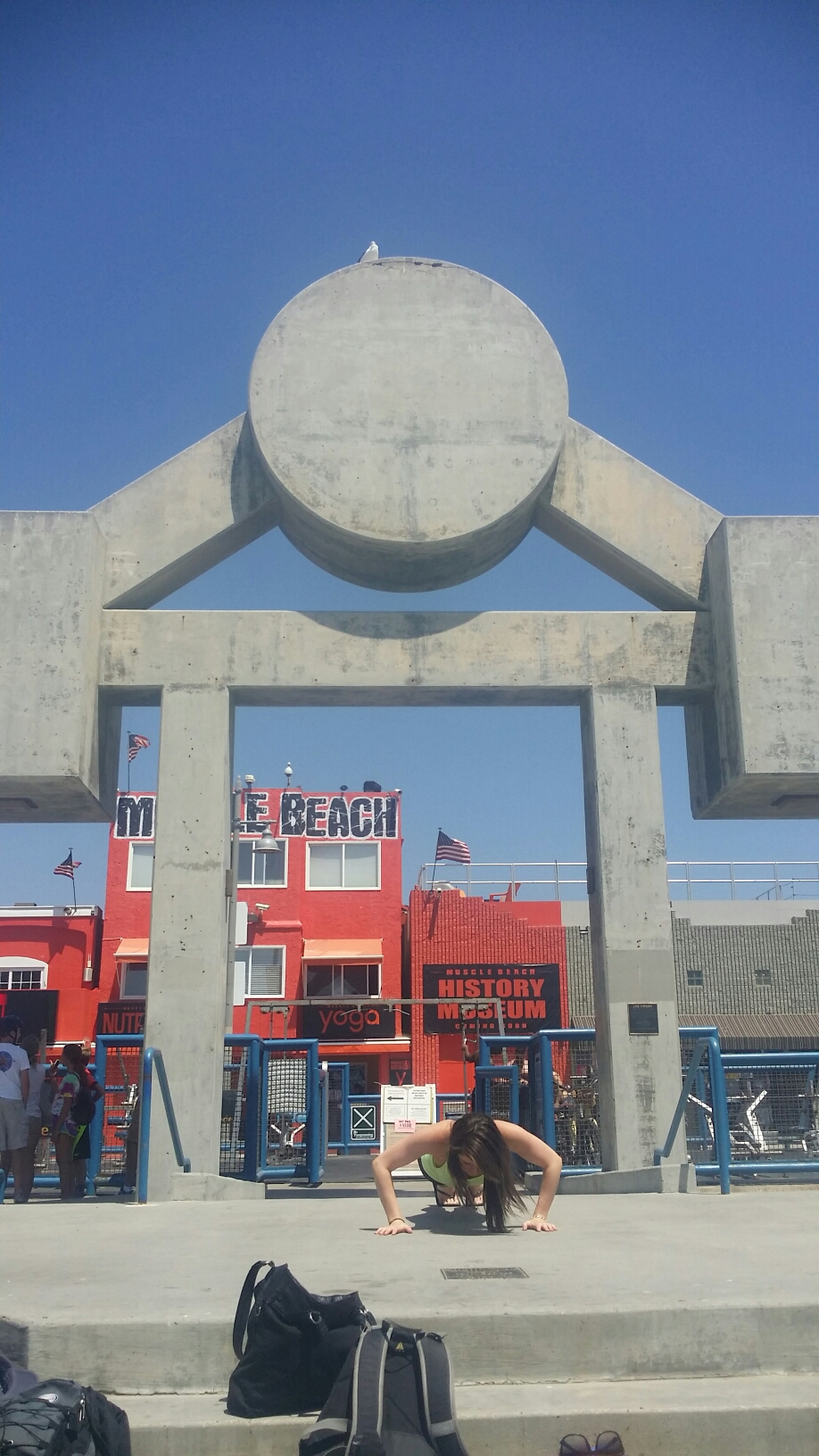 We decided to find a nice spot on the beach of Venice and get our tan on. Or in my case, my burn on. 😈

This is me pre-burn, look how happy I was. 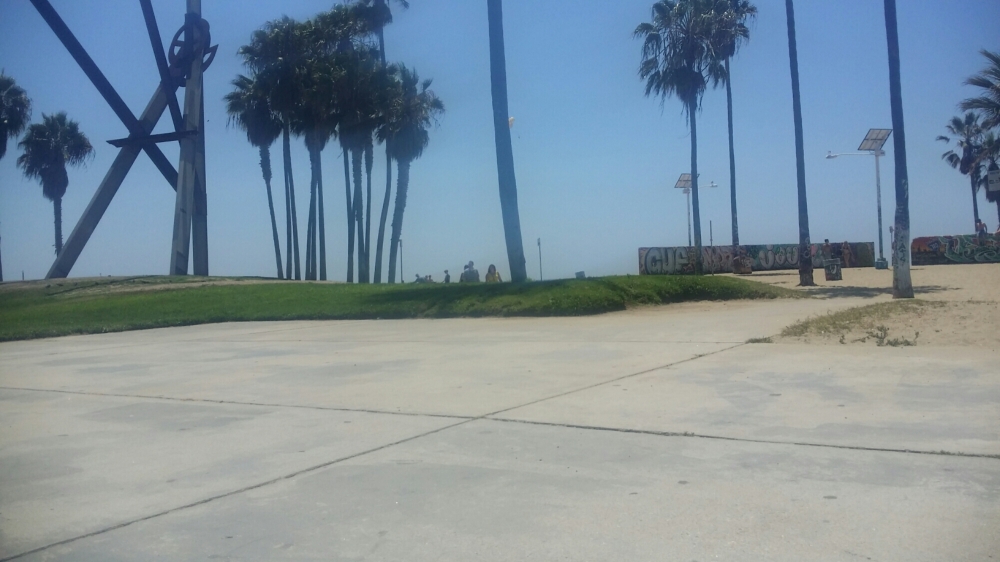 The backs of my legs got burnt as that’s where I didn’t put any sun screen on. I’m such a picky bitch with my sunscreen. I hate the lotions and I’ll only really use the spray. Plus the only spray I like is nutrogena but I didn’t have any with me so had to use cream 😣
It makes the sand stick and I hate it!!! 😝

I got to try out my new bikini I got from Victoria Secrets though!

So brown! Yet, so not-real.

When we finished having a snooze on our towels on the beach, we set off for the walk down to Santa Monica Pier. And my golly, was it a walk and a half!! Ecspecially in jandals. My feet officially hate me.

The 2 aussies also got into an argument with a stall owner as they were going to buy 2 tops off them as she told them “buy 1 get 1 free for $8.99″ and when they went to pay she said it was $20 and insisted she said $18.99 not $8.99
Such a load of crap!! Ecspecially as they were the type of tops you buy in SE Asia and they shrink in the wash so that was such a rip off.
The aussie’s were like “what!! We asked you and you said $8.99″ and then she acussed them of stealing coat hangers off her when they were trying on the tops as she was missing them.
They ended up being like fuck it and walking off without buying the tops that she had SUCH a physco and screamed at them to “fuck off and never come back to my store again! You wasted my time!!!!”

When we finally got to santa monica we checked out the pier and then caught the bus home. (I only have pictures on my actual camera as my phone died)

I was so knackered when I got back. I felt like crap with sand stuck to me in all places, my hair smelling like the sea and old sunblock stuck on my arms and back. I had a shower and then headed off by myself and got some enchiladas for dinner.

Now I’m ready for sleep!!!
Got to get up early again tomorrow morning 😴😴